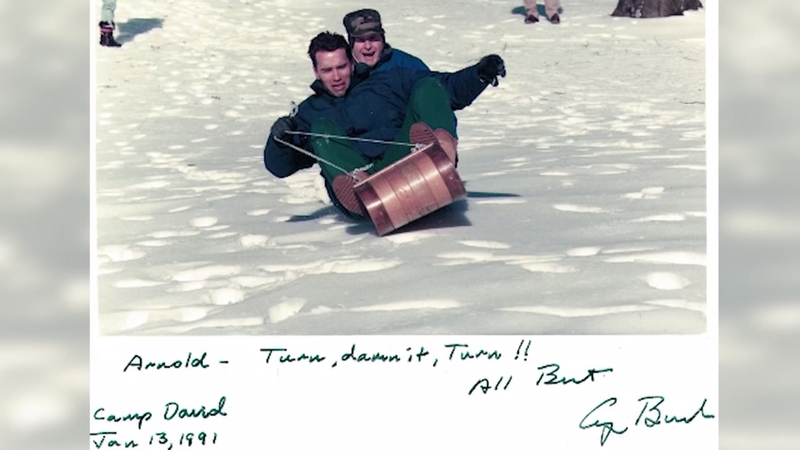 Arnold Schwarzenegger has a special means of remembering the late George H.W. Bush: a photo of the two sledding with a candid caption written by the 41st president himself.

The actor said he has to laugh every time he looks at the photo, which was taken at Camp David in January 1991. Schwarzenegger explained that the photo was taken as Bush was trying to teach him to use their sled.

"I was only used to sledding down with Austrian sleds, which you direct kind of with your feet. So we went down totally out of control," he said.

The trip down the hill ended when they crashed into Bush's wife, Barbara, breaking her leg. Schwarzenegger said that despite this, everyone had a good time.

More than anything, the actor remembered Bush as a man who never ran out of energy. He described a typical stay at Camp David:

"He was exhausting," Schwarzenegger said. "We were doing sports from morning to night. We were doing skeet and trap shooting and horseshoe-throwing and working out with the weights and doing wallyball, which is volleyball against the wall, with the Marines there, and it went on and on, and bowling -- By the time I went to bed at night, I was exhausted. That's all I can tell you."

In addition to his energy, Scwharzenegger remembered Bush as someone he looked up to.