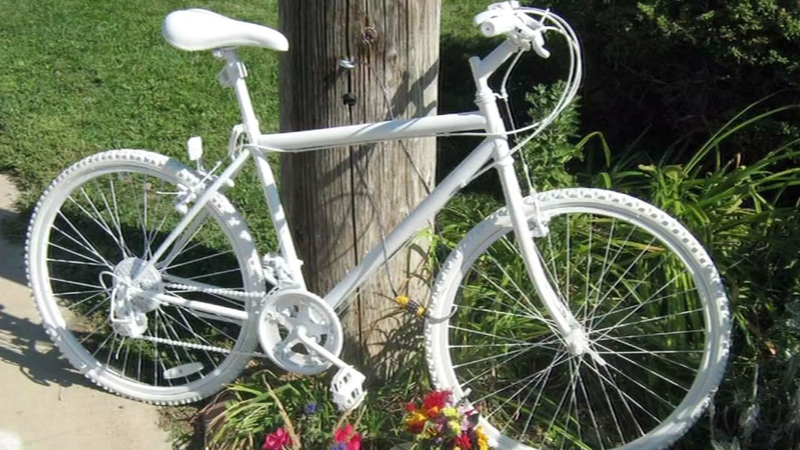 SAN FRANCISCO (KGO) -- There's a worldwide phenomenon known as ghost bikes tributes to fallen bicyclists. In San Francisco they are disappearing and one activist is calling for change in the city's rules for removal.

Ghost bikes are frames and wheels spray-painted white as tributes to bicyclists who were hit and killed.

Julie Mitchell and her family made one for her 21-year-old son Dylan, who died three years ago on the streets of San Francisco after colliding with a garbage truck. "People would stop and pay their respects, they would read it, people would slow down to see it," Mitchell said. "It was making an impact. It was more than just a memorial to us, it was a powerful tool, I feel."

Then one day, it was gone.

"Very disrespectful. Like throwing my son in the garbage," she said.

He was killed riding his bike in SF. A ghost bike memorial was dismantled. Activists say that's a slap in the face. pic.twitter.com/DJqHpexZt7

All over San Francisco, ghost bikes are disappearing. Devon Warner took pictures of tributes that have been removed. As a member of the city's bicycle advisory committee, she's introducing a resolution calling on the public works department to hold off for a year on dismantling.

"I'd like to work something out with the city that would permit the putting up of ghost bikes, of course provided that no ghost bike is posing a public hazard," Warner said.

The head of public works says the current policy is two weeks for any memorials, but he's open to change.

"If it's a piece of art or if it's something that doesn't require a lot of maintenance, maybe here is some common ground to see what's reasonable," said Mohammed Nuru of the San Francisco Public Works Department.

Mitchell says she would erect another tribute to her son, if she knew it would be allowed to stay.

Should memorials like these be preserved in SF? Ghost Bikes honor those killed riding bikes in the city. pic.twitter.com/XtoTcekywP

Mom says she felt like her son was being tossed in the garbage when this ghost bike tribute to him was dismantled.. pic.twitter.com/DBo6y7pbyv

They're called "ghost bikes" memorials to fallen cyclists. Activists say SF is removing them & want that to stop. pic.twitter.com/SRoqdtBTKB