KGO
By Laura Anthony
OAKLAND, Calif. (KGO) -- The preliminary hearing for two key figures in the Ghost Ship warehouse tragedy was set to begin Monday in an Oakland courtroom. However, the families of fire victims will have to wait a bit longer for the start of this legal process that is so important to them.

She's a mother looking for that first step in the long path toward closure.

"I want someone held responsible for this," Mary Vega said outside an Oakland courtroom as she choked back tears.

RELATED: One year later: What we now know about the Oakland Ghost Ship fire

It's been one year since her son, 22-year-old Alex Vega, and his girlfriend, Michela Gregory, died along with 34 others in the Ghost Ship warehouse fire.

The preliminary hearing for Ghost Ship founder Derick Almena and his associate Max Harris was set to begin Monday morning, but was delayed until Wednesday due to the illness of the judge.

"I just want somebody to say, 'I did it, I'm responsible. It's not going to happen,'" Vega said. "I just want closure."

Alex's brother, Alberto Vega, added, "Something needs to happen for this. Can't just let it go."

Almena and Harris are both charged with 36 counts of involuntary manslaughter in the late-night fire last December.

"We do not see criminal responsibility," said Tony Serra, Almena's lead attorney, standing just a few feet from the victims' families in a crowded courthouse hallway.

"It's almost like post-trauma syndrome just touching the case," Serra said. "Everywhere you touch it, there's pain and suffering. The victims were beautiful, wonderful people. My client respects that."

Almena may have set up the Ghost Ship, but Harris has been called his righthand man and the person who allegedly placed speakers in front of a rear staircase, blocking a potentially life-saving exit.

Whatever happens in the criminal case, many of the victims families have joined in a separate civil lawsuit that names not only Almena and Harris, but also building owner Chor Ng and the city of Oakland.

"I haven't seen my son in a year," Vega said as tears streamed down her face. "But it feels like it just happened yesterday." 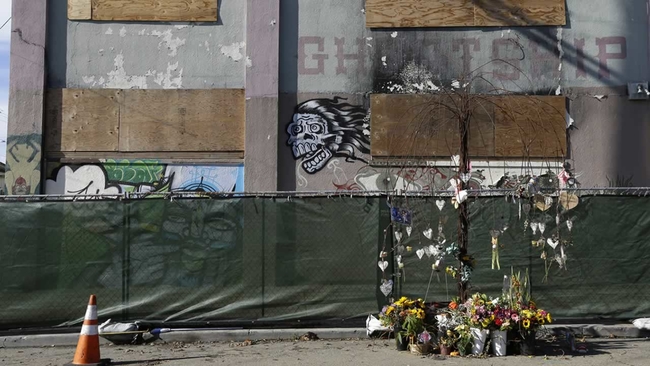 One year later: What we now know about the Ghost Ship fire
GHOST SHIP FIRE