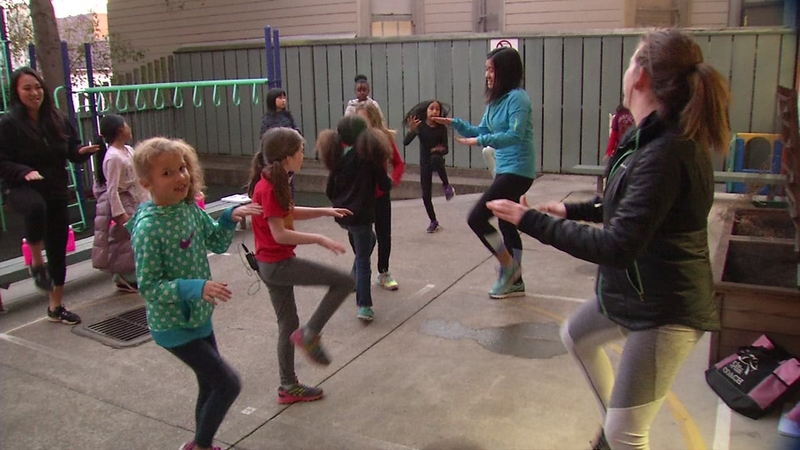 SAN FRANCISCO (KGO) -- Thousands of elementary and middle school aged girls will run through Golden Gate Park this weekend, as part of a Bay Area youth development program called "Girls on the run."

Most days, it's a little chaotic -- adding a news camera to the mix doesn't help, but it sure is fun.

"Girls on the run," an after school program meets twice a week, for 10 weeks, with the ultimate goal of running a 5K, A feat many adults don't ever accomplish.

Ruby Naylor Linden is one of 2,500 girls in the Bay Area that participate annually.

"I love running. It just makes me feel so happy, that after school I can just run," said Ruby.

This is Ruby's second season so she's somewhat of an expert. She'll tell you, it's not all about running.

"You make new friends and you learn about all this cool stuff," said Ruby.

The cool stuff, as Ruby calls it, is part of a 10 week curriculum designed to inspire girls to be joyful, healthy and confident.

"In each lesson there's a certain theme, for example inner beauty, sometimes it's about self-confidence and then they have a game that really kind of ties it all together," said Desiree Wilson, Girls on the Run staff.

In this lesson, the game was a trust circle, there were lots of giggles. We talked about teamwork and community. And these girls are part of a bigger community, Girls on the Run is a national program that celebrated its 20th anniversary this year.

"She can run with her friends, meet new friends and then discuss difficult issues with them," said Erika Linden, Ruby's mom.

"I think it's awesome for the kids to have this activity together," said Natalie Naylor, Ruby's mom.

I'm lucky to have met Ruby on a personal level since I'm one of four volunteer coaches at Garfield elementary school. There are 2,000 volunteers across the Bay Area.

Ruby said she's not nervous at all for the season-ending 5K.

"At first, when I started girls on the run, I thought a 5K would be really long. I realized it was pretty short because I had fun," said Ruby.