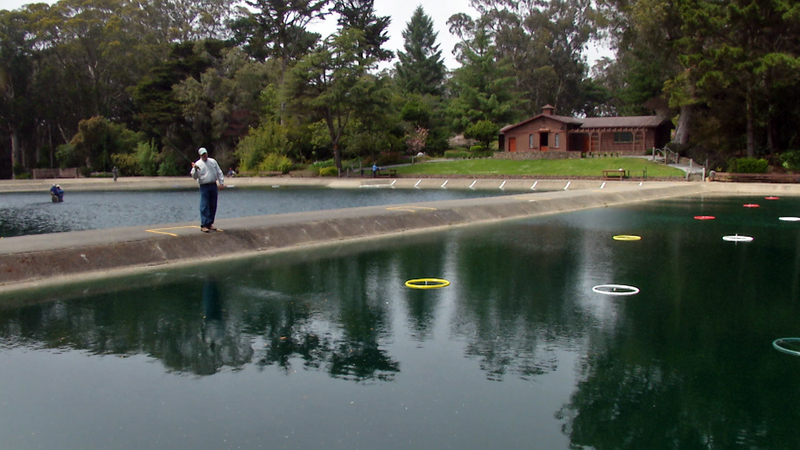 SAN FRANCISCO (KGO) -- Some 13 million people visit Golden Gate Park each year. They visit the museums, the meadows and the windmills, but few venture into one of the truly hidden gems at the park, the Anglers Lodge and Casting Ponds.

It's easy to miss. The entrance is through a small road off John F. Kennedy Drive near the Bison Paddock.

"This is really one of my favorite spots in Golden Gate Park. It really is one of the secret jewels of the park," said Phil Ginsburg, general manager of the San Francisco Recreation and Park Department.

The ponds were built in 1938 as part of the Works Progress Administration, a Depression-era effort to create jobs by constructing public works projects. They mark their 80th anniversary this year.

They consist of three ponds that together cover more than the length of a football field. They are free to use for anyone who wants to practice their fly fishing skills.

"People can wade in, they can use the casting targets to work on their accuracy. They can work on their distance game," said Willy George, president of the Golden Gate Angling and Casting Club. "Sometimes it gets breezy here so they get to practice with the wind. It's to prepare for an outing or learn the game from the start."

The club was created in 1933, five years before the ponds were built. It has grown to 1,000 members, making it the largest fly fishing club in the world.

"This is not a strength sport. It is a technique sport," said George who practices casting a weightless fly on one of the ponds. "The whole rhythm is very peaceful. It has a real zen like feeling to it. Stop and wait. Stop and drop. There is a tai chi aspect."

The casting club is trying to spread that peace. It offers free casting lessons on the second Saturday of every month, from 9:30 a.m. to 12:00 p.m., followed by a free lunch,.