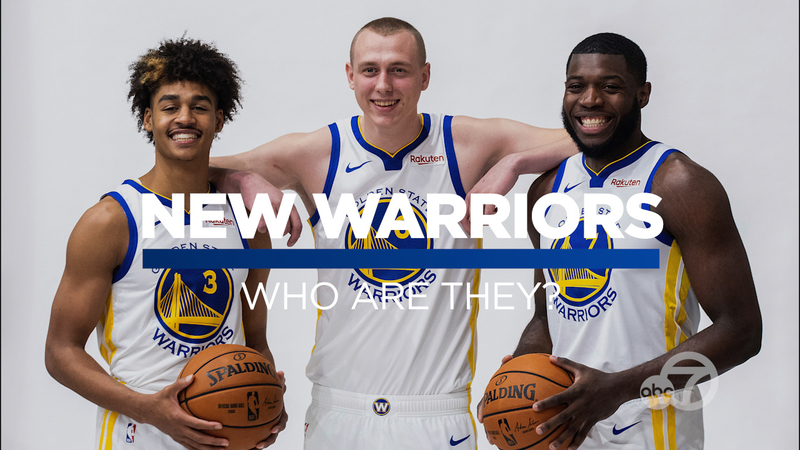 OAKLAND, Calif. (KGO) -- As the Golden State Warriors prepare to move into their new home in San Francisco's Chase Center they are also welcoming three new players to the team including 2019 NBA Draft second-round pick Eric Paschall of Villanova University.

The Warriors have high expectations for the 22-year-old Paschall, who comes with a championship pedigree, winning a national title with the Villanova Wildcats in 2018.

Many experts have likened his skills on defense and offense to those of Dubs star Draymond Green. In fact, Draymond was the first Warriors player to reach out to Paschall after he was drafted.

Paschall was born and raised in New York but his dad lived in San Jose for a while and told his son all about the Bay Area.

ABC7 News talked with Paschall about the draft process and joining the Warriors:

Why he's excited to join the Warriors

"I actually told me parents during this whole draft process that I wanted to come to the Warriors. So everything ended up working out and it's just a blessing to be here."

Did he watch a lot of Warriors games last year?

"You have to! They win so much. I definitely watched them a lot. I watched them a with my teammates, because Coach Wright has a very good relationship with Coach Kerr and Bob Myers. Coach told us to watch the Warriors a lot because he tried to emulate that in college as well."

He's been compared to Draymond. Is he excited about spending time with Green?

"I'm looking forward to it a lot! He's a very animated guy and I really like it. I really do!" "I like his tenacity, I like his character. I like how he's just always fired up and I definitely want to learn from that."

"A lot of my close friends are like 'I'm mad, because you have great weather every day. Every single day you have great weather.' One thing, is that it's a lot slower out here. I'm used to East Coast, New York City, walking around fast. I kinda like it out here because it gets me to relax as well."

What is he looking forward to about being in the Bay Area?

"Just being able to live in San Francisco. I've heard it's a great city."

How he thinks he can help the Warriors win

"Being a versatile defender and being able to guard multiple positions definitely helps a lot. Being able to open up and knock down an open shot. All that stuff matters and I try to work on that everyday."

With KD & Klay's futures up in the air, is it a weird time to join the team?

"Of course it's a weird time. The team has to get their players, but I'm still very fortunate to be apart of this team and this culture."