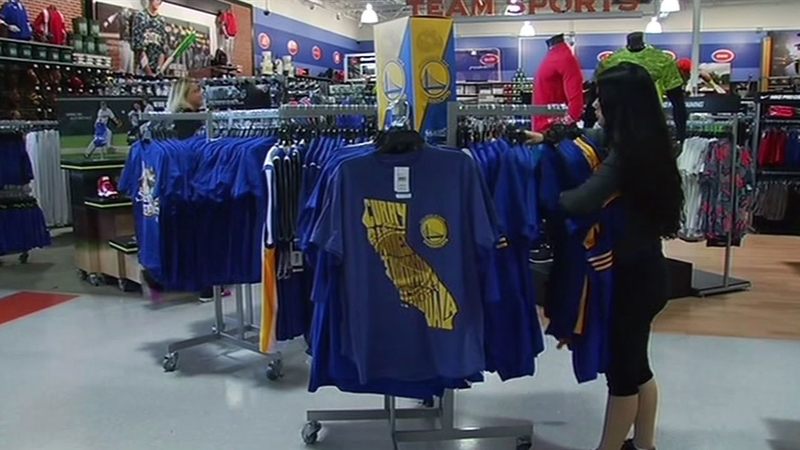 OAKLAND, Calif. (KGO) -- The Golden State Warriors will do something on Tuesday night that they haven't done in 39 years -- play in the Western Conference Finals.

The Dubs face the Houston Rockets, who hopefully brought their earplugs because Warriors fans are ready to be loud.

The inside of Oracle Arena is covered in Warrior gold, ready for the first game of the Western Conference finals.

Oracle Arena is covered in Warrior Gold -- ready for tonight's game against The Rockets. Tip off is 6pm. #dubson7 pic.twitter.com/vtfC8frXOV

Outside the arena, fans are also flying the colors.

Even though fans at Tuesday's game will get a complimentary t-shirt and some will get a foam hand, people are still buying Warriors merchandise at a swift pace.

Sales are up 65 percent this playoff season compared to the regular season.

Warriors colors are all over the place today! pic.twitter.com/hnQ548vU0q

Dick's Sporting Goods in Dublin had to restock the store with a new shipment and it's already selling.

"We are going to experience something that very few people in the Bay Area have ever experienced and that's Game 1 of a conference final... it's going to be nuts," Warriors fan Matt Meabon said while stopping by Dick's Sporting Goods to pick up some more gear.

To meet the demands, the Warriors opened a new store in the arena in March and will open another one this Saturday in San Francisco.

Fans have definitely noticed more blue and gold on the streets.

"Time has changed. A decade ago, you wouldn't see Warriors gear at all. Now everywhere you turn you see blue and gold," Warriors fan Paul Wong said.

The Houston Rockets come into the game tonight as the underdogs and they will face a home crowd that plans to be very loud.

"Loud enough so I have to work tomorrow, not sure I can talk," Meabon said.

This is a best-of-seven series. Tipoff is at 6 p.m. and the winner of this series will go on to the NBA Finals.