The new reason some in Houston may not like Stephen Curry: Popcorn 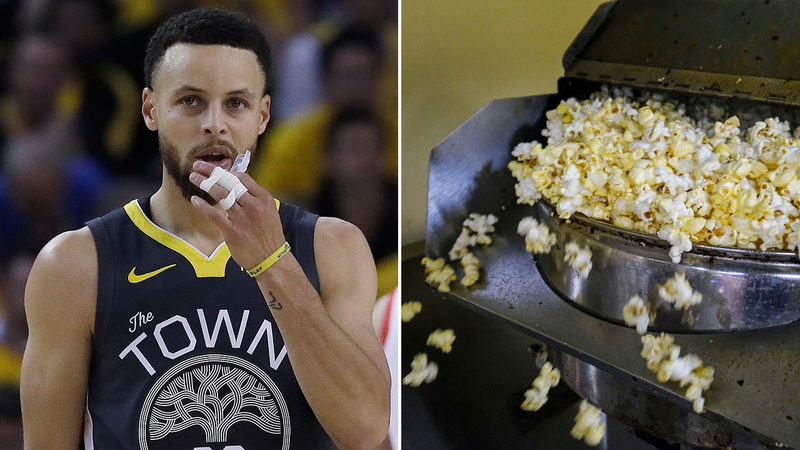 HOUSTON, Texas -- As if his lights-out shooting stroke isn't enough to frustrate Houston Rockets fans, Stephen Curry of the Golden State Warriors is giving a new reason for H-town to dislike him: popcorn.

Curry said he prefers Dallas over Houston when it comes to popcorn.

The NBA player requests popcorn at every arena. Recently, he ranked each city's salty snack.

Although he put Dallas ahead of Houston, the Rockets landed in Curry's top 10. A big part of that, the Rockets said, is tied to employee Christopher Thompson, who works outside section 106.

"He is the guru of the popcorn," Levy Restaurants executive chef Eduardo Romero said.

Thompson is not only fulfilling fans' fuel. The guru has caught the attention of one of the NBA's best players.

You may not know it, but Stephen Curry has a popcorn problem. Before each game, he requests a bucket.

At the Toyota Center, it comes right from Thompson's popper. Curry said Houston's popping corn is seventh best in the league.

"The top 10 is pretty competitive," Curry told ABC13 Eyewitness News. "Honestly, I don't know what the big difference is between number three and number seven. The top two are undefeated."

Curry ranked each arena's popcorn on a series of factors. He judged it on freshness, saltiness, butter, crunchiness, and presentation.

The Rockets said it's no surprise Thompson's bucket made Curry's top 10, because those are factors he works on with each batch.

"Time is the key ingredient," Romero explained. "Saltiness, obviously, and butter that we put on right there. It has to be perfect."

But it's not perfect, according to Curry. The Mavericks, he says, come close to perfection.

Eyewitness News asked Curry how Houston could get better.

"I don't know where they source their kernels from," Curry said.

The Toyota Center staff said they hear his concern.

"I think we have to rethink what we have to do so we can move up and beat the other guys," Romero said.

It's a challenge the Rockets' popcorn guru is ready to tackle, so fans have even more to cheer about when they enter the Toyota Center.