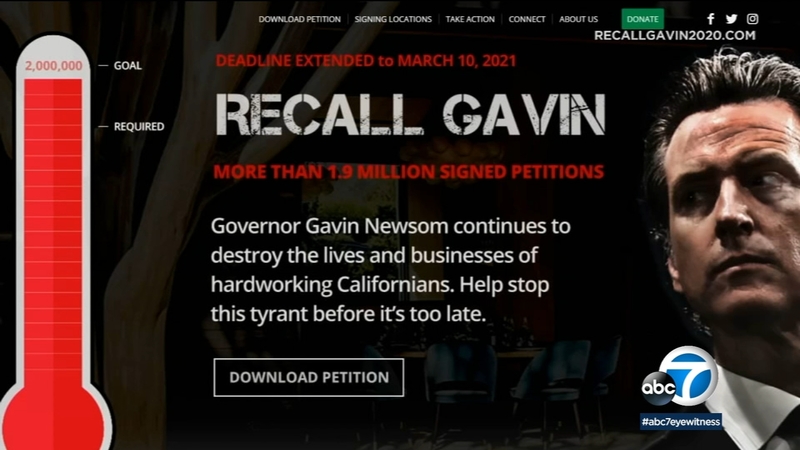 Organizers say they have the signatures for recall vote of Newsom

Less than two weeks from the deadline, organizers of the drive to recall Gov. Gavin Newsom say they have enough signatures to put the measure on the ballot.

To make the ballot, they need 1.5 million of those signatures to hold up under the verification process by March 17.

Petition organizers typically know they need to collect well over the legal minimum because many signatures are later disqualified as invalid by local election officials. Political experts estimated the recall would need 1.8 million to 2 million signatures to qualify for the ballot.

Newsom has been under fire for his handling of the COVID-19 crisis, as well as issues such as increasing crime and homelessness.

The state deadline to submit signatures to force a recall election of Governor Gavin Newsom is just one month away -- and organizers believe they will be successful. So how does a recall work? We have an explanation here.

Just last week, Newsom announced baseball stadiums and theme parks, including Disneyland, would be allowed to reopen at reduced capacity for California counties in the red tier.

Proponents of the recall say there's a reason all of that was announced when it was.

"It's no coincidence. It's just a political plan, it's political survivorship. He should've done this eight months ago and for him to have shut down the fifth largest economy in the world the way he did, without any checks and balances," said Randy Economy with the recall campaign. "It was a disaster and he is an example of what is wrong with politicians in America."

Newsom has received support from Democrats, including Sen. Bernie Sanders, who tweeted that "We must all unite to oppose the recall in California."

Right-wing Republicans in CA are trying to recall @GavinNewsom for the crime of telling people to wear masks and for listening to scientists during COVID. Extremist Republicans have done enough to undermine democracy already. We must all unite to oppose the recall in California.

After the signatures have been turned in, county election officials have until April 29 to complete the verification process.

If enough signatures are verified, the lieutenant governor would set a date for the recall within 60 to 80 days - most likely late summer or the fall. In addition to the recall question itself, the ballot would include potential candidates to replace the governor if recalled.

When asked about the recall recently, Newsom said he was more focused on pressing issues such as vaccination efforts and economic stimulus, not the recall.

There has only been one successful recall effort against a governor in California history, when Gray Davis was removed from office and replaced by Arnold Schwarzenegger in 2003.