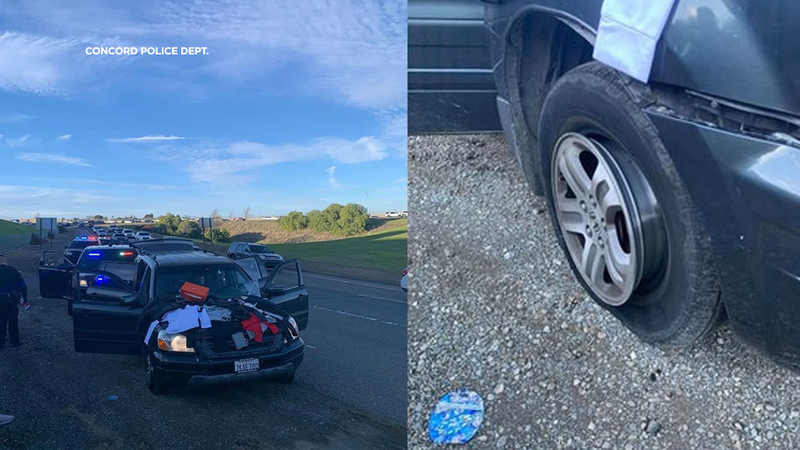 CONCORD, Calif. -- A man and woman who fled with merchandise Saturday from the JC Penney store at Sun Valley Mall in Concord were arrested after spike strips disabled their car, Concord police said on social media.

1 of 2: SET officers spotted two individuals that were just involved in a ‘grab-n-run’ theft from JC Penney’s. They jumped into their car and led us on a pursuit. While you can try and outrun our cars, you can’t outrun our radios! -392/586 pic.twitter.com/ux6d5c9nos

The grab-and-run theft was noticed by patrolling officers of the Concord department's special enforcement team.

The suspects fled when officers approached, taking off in a getaway car with officers in pursuit and calling for backup.

"One of our sergeants was able to position himself well ahead of the pursuit on (state) Highway 4 and was anxiously awaiting as the suspects approached the Willow Pass Road exit," the department said in its post.

Spike strips were placed that disabled three of the car's tires and brought the pursuit to a halt in Pittsburg, where the woman driving pulled over.

2 of 2: Spike strips were used, bringing this chase to an end. Make no mistake, we don’t like having to chase people, but if you come into our city and attempt to victimize any of our citizen’s and/or businesses, we will come after you. -392/586 https://t.co/787qWgVstj pic.twitter.com/QL5TEhYiRy

The 31-year-old woman and 28-year-old man, both from Bay Point, were arrested. The woman was charged for multiple theft and driving offenses, along with violation of her probation, police said.