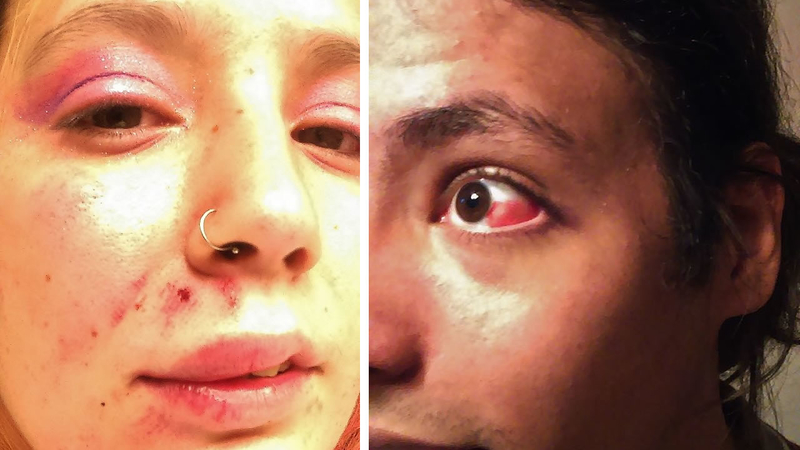 It was supposed to be a fun Halloween night for a brother and sister at Great America in Santa Clara but they say they were attacked when they objected to people jumping in line.

Some are questioning if the amusement park did enough after the incident.

Keisha Johnson, 24, and her 21-year-old brother Michael were standing in line at one of Great America's scary Halloween mazes Saturday night. They spoke up when a group of five cut in line ahead of them.

Their objection was met with cussing and shoving and then the situation seemed to calm down.

Only on @abc7newsBayArea at 6: 2 adults beaten up at @CAGreatAmerica. Victims need witnesses to ID assailants. pic.twitter.com/uUGY0og6CW

"There was no more confrontation. The next thing, I just got punched when I wasn't looking," Michael Johnson said. "He ran up behind me and punched me in the side of the head and knocked me out with the first punch. So, I didn't expect that at all." Johnson said he actually blacked out for about a minute and a half.

While Michael Johnson was unconscious, two women in the group turned on Keisha Johnson.

"They dragged me down. They tackled me. They punched me in the face. They dragged me on the floor. One was kicking me. The other, one was holding my hand, the other was punching my face over and over, nonstop," Keisha Jonson said.

Photos taken by the Johnsons that are exclusive to ABC7 News document the beating Keisha Johnson took. She had to be treated at a nearby hospital. Another photo shows the broken blood vessels in Michael Johnson's eye.

The family is unhappy that Great America did not interview witnesses to help identify the attackers.

"They didn't want to infringe on the enjoyment of the other people, so they didn't ask any questions," said Michael Johnson, father of the two victims.

They're hoping someone who was there Saturday night will provide police with photos or video of the incident. Great America is checking if it has any video. It issued a statement: "We are working with the Santa Clara Police Department to assist in their investigation."