Beaches closed, but Guerneville is open and moving past flood on Memorial Day 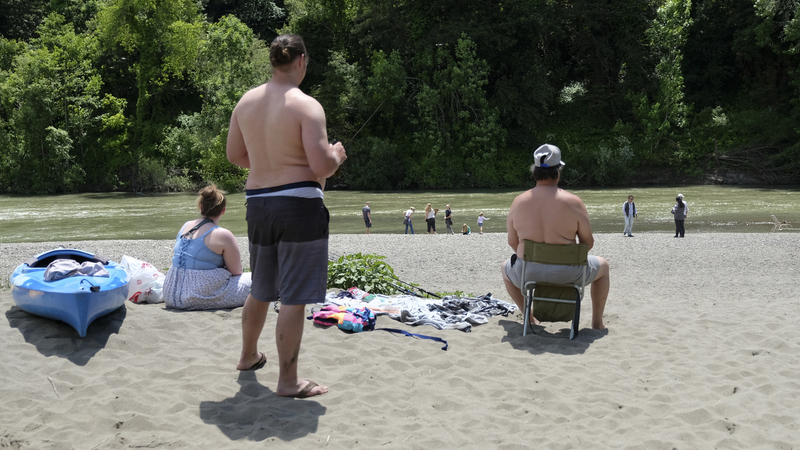 Guerneville is open and moving past flood on Memorial Day

GUERNEVILLE, Calif. (KGO) -- Memorial Day weekend usually means big business along the Russian River. But instead, many are rebuilding following flooding in February.

If you believe the sight of all the customers inside the Russian River Pub Monday morning, then maybe the near-record flood of last February feels like ancient history. However, owner Wendy Gause tells us business has remained weird this year.

"It's definitely lighter. It should be 100 degrees and packed full of people on the river."

And then we read the sign at the entry to Johnson's Beach, which has been closed all weekend. Blame the current. "They say it is moving too fast," ABC7 News Reporter Wayne Freedman told Janel Wellborn from Berkeley.

We're told the beaches closed in #Guerneville and #MonteRio due to an unseasonable fast moving river. It did not keep some people out of the water, however. Or prevent this Oakland man from trying to throw a rock from shore to shore. #abc7now #RussianRiver pic.twitter.com/9RDcaLqq8v

"Yes, that is the word on the street," she said.

A street that appeared particularly busy in Guerneville on this national holiday. That's a rousing vote of confidence for this community.

"Nothing can hold them back. No fires. No floods," said Marcy Kaufman from San Francisco.

RELATED: How bad was the Russian River flooding? Guerneville residents get first look

Such an outlook has taken time. "There has been amazing progress," Jeff Bridges told ABC7. He owns the R3 Hotel. Last February's flood destroyed 19 of 23 rooms. He hopes have the place open in late June. "The place would be packed right now."

"Are you counting the dollars you are not getting from customers this weekend?"

Checked back w/the Farmhand Deli, who we have covered since the flood. Lisa and Jason Flint had targeted the Memorial Day weekend after floodwaters went four feet deep inside.

Did not make the deadline, but are close.

"I stopped doing that a while back."
So are Lisa and Jason at the Farmhand Deli, whom we have covered all through their rebuilding process. They set Memorial Day as a target for reopening, but it hasn't happened not yet.

"We're getting close," said Jason. They expected maybe a foot of water during the flood, got a lot more, and all the mud that came with it -- even on walls and windows.

Every day seems to bring another unwelcome surprise.

"Like my husband said, you knock your shoes together and the sand keeps coming," Lisa told ABC7.

They hope to open their doors next week.

For all those wounds that time does not heal, there is no substitute for hard work.

Alongalong the #RussianRiver this #MemorialDay, checking recovery from last February's flooding. "It should be hot by now. Business a bit off," said Wendy Gause of the Russian River Pub. "Off just a little." Seconds later, a party of 16 arrived. #abc7now pic.twitter.com/k02xaq7Tjg