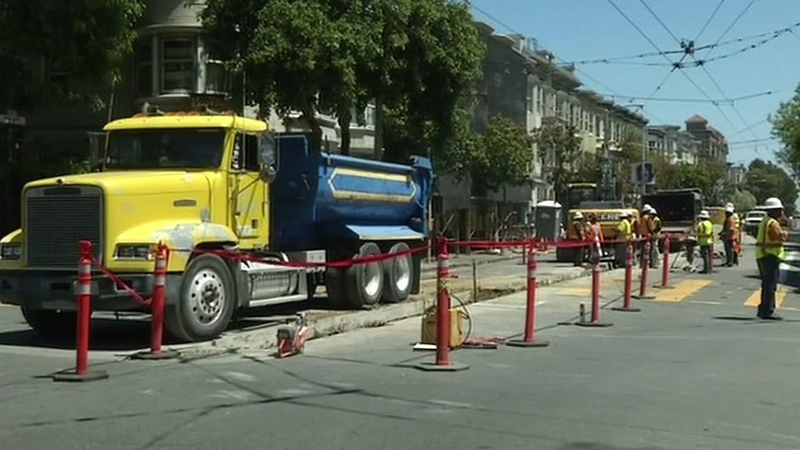 SAN FRANCISO (KGO) -- A multi-million-dollar public works project in San Francisco's Haight-Ashbury neighborhood is on hold after an unprecedented number of gas leaks. Now a city investigation is underway.

The project was supposed to be an 18-month to 20-month project to improve Haight Street, but just six months in, it has been shut down because of safety concerns.

The first gas leak happened in April as crews worked on a $13 million project to install water mains, replace sewer lines and repave Haight Street. By last week, they had reached five ruptures all on one block and merchants like the owner of Mom's Body Shop have had more than enough.

"My business is down, everybody else's business is way down too and it's because they keep hitting the lines, causing the street to get shut down," Dave Groeschel, the owner of Mom's Body Shop, said.

In addition to the gas leak, there have also been two sinkholes.

"Compared to other parts of the city, we've never had that number of disruptions due to either gas leaks and safety concerns," San Francisco Public Works spokesperson Mohammed Nuru said.

PG&E says it's not to blame for construction crews repeatedly striking gas lines.

"We went out and located and marked our lines. In this case, our lines were properly marked," PG&E spokesperson Donald Cutler said.

Merchants showed ABC7 News pictures of the work that has now been stopped indefinitely. The contractor, Ghilotti Brothers, and sub-contractor, Synergy Project Management, did not return our calls or emails. The city has given Ghilotti Brothers until the end of the month to come up with a remedy and is pushing to fire the subcontractor.

District supervisor and board president London Breed is calling for an investigation. She said, "It's our responsibility as city officials to get to the bottom of it and to find someone to do the job in a safe manner."

Not everyone on the block is worried. One store employee said, "Oh, come on. It happens. It's an old line."