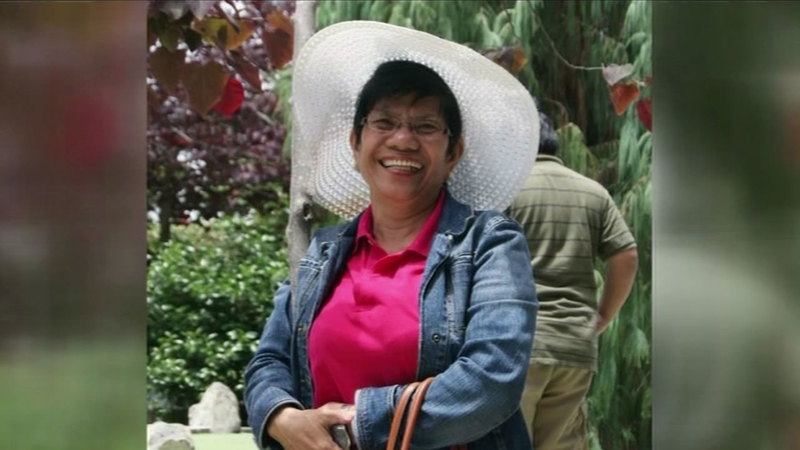 Hayward, Calif. (KGO) -- A Hayward family is now making funeral arrangements for their mother who was killed crossing a busy street Monday night.

The driver who hit her took off after getting out and seeing what had happened.

ABC7 News has been talking with the family, who hopes the driver and passengers in that car will do the right thing.

The family of Aurora Bermudez mourns her death after struck in a crosswalk in #hayward. At 5 & 6 @abc7newsBayArea pic.twitter.com/xtGHdRubN2

The accident happened along busy Hesperian Blvd., where cars routinely whiz by, making it tough for pedestrians to cross.

Aurora Bermudez, 65, was mowed down just after dark by two southbound vehicles. The second driver stopped and is cooperating with police.

The driver and two passengers in the first vehicle got out, saw what happened, and then took off in their burgundy or dark-colored 1990s four-door Toyota Corolla.

The family of Aurora Bermudez came out to the scene, shaken and saddened that people could have no compassion for their mother.

Coming up @ 5: Family seeks justice after a driver takes off, leaving mother dead in a crosswalk. @abc7newsBayArea pic.twitter.com/VApdfBwJ7d

"We're praying for justice for my mom, for her untimely death, that justice would be given to her and to us," daughter Marietta Bermudez said.

Hayward recently installed a crosswalk signal to alert drivers to stop but pedestrians say it's still unsafe to cross here.

"It's too dangerous, too risky," Hayward resident Foulata Finau said. When asked if it's because cars drive so fast, she responded, "Yeah, this is a speeding area."

Bermudez was a widow with three daughters, a son, and grandchildren. They have a message for the people in the car that killed her.

"Guys, whoever you are right now, the police are looking for you. My family forgives you. I forgive you, no matter what," son-in-law Jon Catle said.

The police are still searching for video that might lead them to the car and driver.