Up to 1,500 BART riders possibly exposed to measles 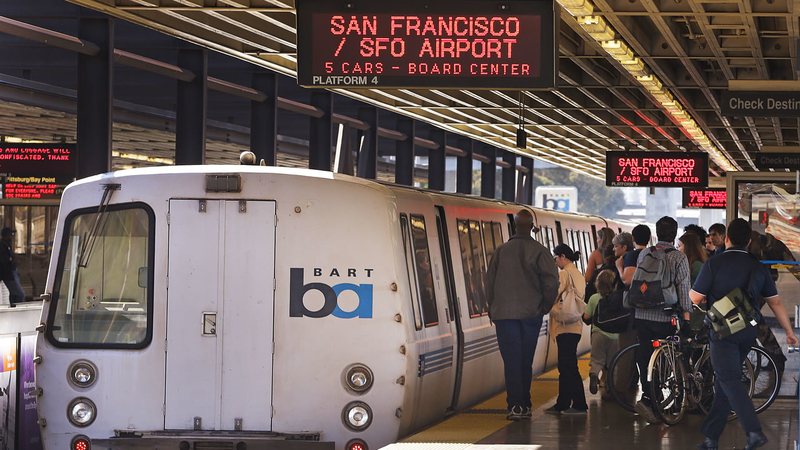 MILLBRAE, Calif. (KGO) -- As many as 1,500 BART riders may have been exposed to measles when an infected San Mateo County resident rode BART from Millbrae to San Francisco's Civic Center station last week, BART and San Mateo County health officials said on Thursday.

The patient boarded a Richmond-bound train at Millbrae at about 4:30 p.m. last Friday and exited at the Civic Center station at about 5 p.m., according to county health officials.

The trip was against the typical commute direction on a "very isolated line," so the number of people potentially exposed to the disease was limited, BART spokeswoman Alicia Trost said.

"You might only have a dozen or so riders on one train car," she said.

BART believes about 1,500 people got on board that Richmond-bound train during the hours of 4:30 p.m. and 7 p.m. last Friday.

The reason BART recorded a two-and-a-half hour window is because the measles virus stays alive for at least two hours.

"The person was on the train for only 30 minutes, but we wanted to give it some extra time because we know how long the virus remains in the air," explained Taylor Huckaby, a BART spokesperson.

The infected person traveled from the Millbrae station and got off at the Civic Center station in San Francisco. Still people who got on that train after that could have been exposed.

Family members and friends of the patient have been notified. So has the person's employer, in case co-workers may have been infected.

BART commuters reacted to this latest case - the fourth in San Mateo County.

"You hear about a case you get a little scared but if that happens, it happens. If it's going to be airborne, there's nothing much I can do. I won't walk around with a mask or anything like that," Javier Lopez, BART passenger.

"I think they should make it obligatory in order to avoid a measles outbreak," said Hector Poblete, also a BART rider.

This latest incident is not expected to affect as many BART riders as the one earlier this month when a LinkedIn employee traveled during the heavy commutes hours from February 4 through February 6, from Lafayette to San Francisco. By contrast, the number of BART riders who were potentially exposed then many as 25,000 because it was a busier line and time, Trost said.

San Mateo County is urging anyone who may be have been on that Richmond train to get tested.

They are also asking residents to get a measles vaccine.

It is the fourth measles case reported in San Mateo County since a statewide outbreak began at Disneyland in Southern California in December. Morrow said county health officials have so far been unable to determine if this case is connected to the Disneyland outbreak.

Despite the U.S. declaring measles eradicated in the country since 2000, a growing number of people declining to vaccinate themselves or their children has led to the disease spreading from international travelers, Morrow said.

The disease, spread through the air, is highly contagious and can be dangerous, particularly for children. Initial symptoms typically include a high fever, cough, runny nose, and red eyes. Three to five days after the
appearance of symptoms, a red flat rash develops on the body.

County health officials said they are compiling a list of people the patient had contact with and places visited while contagious. The person's employer has been cooperative in discovering which other employees may have been exposed, county officials said.

Anyone determined to have been exposed to the disease is being contacted and informed of the risks and having their immunization status determined.

"The measles vaccine is safe and being vaccinated not only protects you and your family, but every child and person in your community. I strongly urge everyone to get vaccinated and help stop the spread of measles," Morrow said.