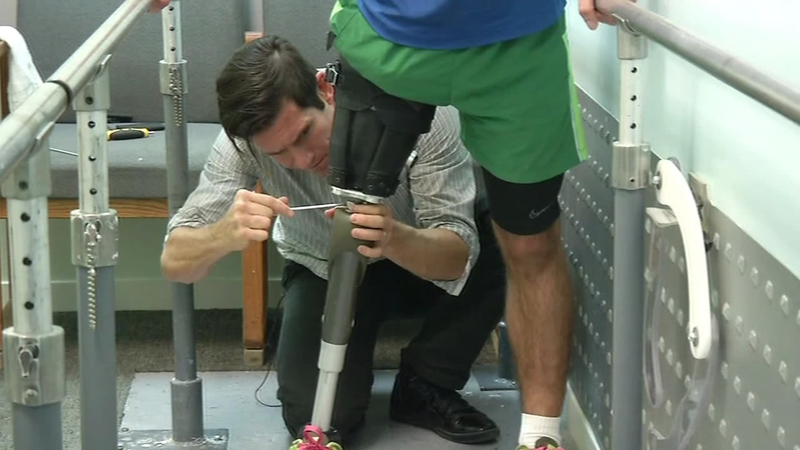 SAN FRANCISCO (KGO) -- Many of us take our two working legs for granted. But for amputees, walking with prosthetics can be painful if they don't fit right. A Bay Area company is working to make their lives better with a totally new take on how to attach artificial limbs, that could be the key to easing the pain.

Ranjit Steiner was an athlete from the time he was little.

"I was about 15 years old when I was diagnosed with bone cancer, about to turn 16," he said.

After years of failed treatments and surgeries, he made the tough decision to amputate his right leg.

"You know, maybe I wouldn't be quite as good of a football player as I was," he said. "But at least I'd be out there and I'd be able to run."

Flexible blades and computerized joints have advanced prosthetics for running by leaps and bounds.

"However the socket in and of itself is still a rigid frame," explained Lim Innovations Founder Andrew Pedtke, M.D.

Like most prosthetics, it's molded from a plaster cast, and doesn't bend. That's good for running sprints. But off the track, Steiner found that life is an endurance sport.

"There's a big party tonight, I'm gonna stay home all day so I have energy to walk around and get there," he said.

But something new has changed all that.

"A lot of comparisons and inspiration were taken from the snowboard and ski industry," Pedtke said.

The founders of Lim Innovations call it the "infinite socket." It's modeled on a computer, fine-tuned with a heat gun and 3D-printed parts. And it's adjustable, any time.

"We've had patients that have come to us that could not wear their socket for more than 30 minutes, they could not walk more than one block," said Pedtke "And we have those patients now walking miles a day and comfortable over 24 hours."

Lim Innovations is in its earliest stages, making these infinite sockets here in the basement of a San Francisco prosthetics clinic. But already, it's getting attention on an international scale.

To those who try it, it's practically selling itself.

"They say things like, 'wow it's got some spring to it and some shock absorption,'" said Lim Innovations co-founder Garrett Hurley.

"But what I really like to hear is the silence," said Pedtke. "I like to hear somebody come in, put this on, go away and never come back. And then find out at some point they're still wearing it."

But that wasn't the case for Steiner. He went to work for the company as their outreach director.

"If you're empowered to be in charge and your leg's not dictating your life, you're dictating your life, that's the best lifestyle you can live," he said.
Related topics:
health & fitnesssan franciscogadgetsstartuptechnologysurgerysportsdoctors
Copyright © 2021 KGO-TV. All Rights Reserved.
More Videos
From CNN Newsource affiliates
TOP STORIES