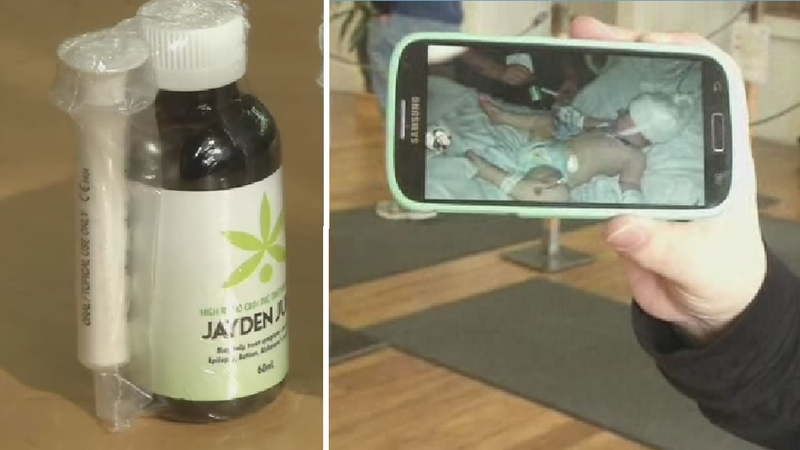 OAKLAND, Calif. (KGO) -- Bay Area researchers are about to begin testing a new drug that could offer hope to children with a life-threatening disease. It's based on a form of medical marijuana that parents say is already helping their children.

On most days, 2-year-old Avery Lee is a bundle of energy. But during frightening episodes, her body can be wracked by seizures so severe they verge on life-threatening. Once she was in a coma for eight days.

The toddler's parents soon received the diagnosis of Dravet Syndrome. It's a severe form of childhood epilepsy with limited treatment options. But along with existing medications, Avery's parents began considering a drug called CBD, which is a processed form of medical marijuana.

"So at first we were afraid and we didn't know what to do," said Avery's mother, Nina Rose. "But we had seen such terrible things with the other medications that we were willing to take a chance.

CBD can be taken orally. And at dispensaries like the Harborside Health Center in Oakland, it's increasingly in demand. Families with children suffering from conditions like Dravel believe the drug calms the seizures more effectively with fewer side effects.

Executive director Steve DeAngelo manages the program, which now accepts families from states that have not approved medical marijuana.

"I'm in touch with families from all over the world," he said. "And so we are welcoming parents to bring their children to Harborside Health Center, as long as they have a recommendation from a California doctor."

While the medical marijuana movement has opened up access for families of epileptic children, what it can't provide is long-term clinical data to back up the perceived benefits. Those benefits are most often self-reported by families desperate for relief.

But now, for the first time, researchers at UCSF are preparing to study the long-term effects of pharmaceutical CBD in pediatric seizure patients.

Dr. Maria Roberta Cilio, M.D., began treating a limited number of children with intractable seizures last year in an early open label study. The drug was a pharmaceutical form of CBD with no psychoactive properties from British drug maker GW. After three months, the average number of seizures were cut by more than half in the total patient group and by 63 percent among the Dravet Syndrome patients, according to parent reporting.

While encouraging on the surface, Cilio cautions that relief seen in early drug studies can sometimes be temporary.

"This what we call the honeymoon period," Cilio said. "For this reason, it's important to look at the long term."

The new trial, scheduled to begin this year, will use a 100 percent synthetic version of CBD. It will also be randomized, so families and researchers won't know which children received the drug for the first three months. Children who do respond, will be followed for long-term studies.

"That will give us information about how long response, if there is a response, how long is it sustained," Cilio points out.

While research progresses, many families continue to search for relief. Avery's family is not participating in the UCSF trial, but plans to continue treating her with the cannabis-based CBD.

"Every day we saw more and more improvements," Rose said. "And eventually, she started walking and talking and holding her head up and doing things were she was almost age-appropriate."

They're results that Avery's parents believe have changed her life for the better, even if the long-term benefit remains, as yet, unproven.

One additional note, Cilio says the results from the UCSF trial will apply only to the synthetic drug they're testing. That's because the formula and dosages are likely to be significantly different than commercially available CBD.