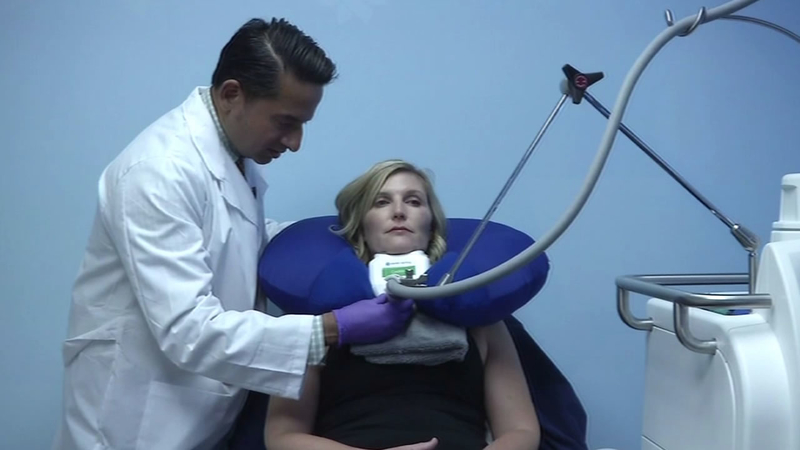 SAN FRANCISCO (KGO) -- Whether it's just a little sag, or a so-called double chin, getting rid of fat under the jaw can be difficult, even with diet and exercise.

A Bay Area company has won FDA approval for a device designed to remove that fat without surgery or injections.

At first glance, it may appear like a woman, with the machine and big pillow around her neck, is getting ready to blast into space. But she's actually a volunteer from Bay Area-based ZELTIQ. The company has just unveiled a new treatment to freeze away chin fat.

San Francisco dermatologist Vic Narurkar says the system known as cool sculpting, was first developed for larger areas of the body like the waist and hips. The deep chill kills fat cells underneath the skin, which are then washed away by the body.

"There's a temperature that fat freezes at and everything else is remained intact," said Dr. Narurkar.

But the new double chin treatment required a more delicate, scaled-down applicator. Over the course of about an hour, the miniaturized housing chills the fat without aggravating surrounding nerves, located along the jawline.

Still, the initial result is a bit startling.

"Now, you can really see the stick of butter," Narurkar said.

A butter-shaped cube of frozen fat cells collects underneath the chin.

"You're going to be a little pink, and maybe a tiny bit of swelling," Narurkar said. "So there's not a lot of recovery with the cool mini treatment."

Doctors then slowly massage the area to dissolve away the dead fat. The treatment takes several months to show the full results seen in the before and after photos provided by the company.

"Once the fat is gone, it's gone, so they don't have to keep coming back again," Narurkar said.

He says since the cool sculpting doesn't involve surgery or anesthesia, it's generally less expensive than liposuction with a quicker recovery time, which could help some patients warm up to the idea of freezing.

The treatment is expected to cost around a $1,000 a session and some patients may require two treatments to get the full benefit.