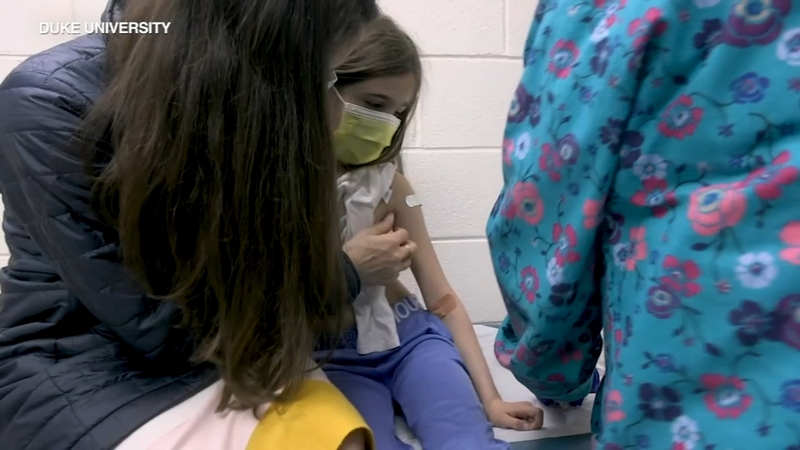 Parents mixed on signing up children for COVID vaccine

Vaccine advisers to the US Food and Drug Administration will meet Thursday to discuss what information the agency should ask for in considering the go-ahead for vaccinating children under 12 -- including how many children need to be enrolled in clinical trials and how much safety data will be needed.

Members of the FDA's Vaccines and Related Biological Products Advisory Committee (VRBPAC) will not be asked to discuss specific vaccines or to vote on any issues, but instead will weigh in on what specific extra information companies will have to provide in seeking authorization or approval for children.

Pfizer's COVID-19 vaccine is currently authorized for people 12 and older in the US. Pfizer said Tuesday it would begin testing its vaccine in children as young as 5 using smaller doses than what is authorized for people 12 and older. The company said its Phase 2/3 trial will enroll up to 4,500 children in the United States, Finland, Poland and Spain.

Pfizer and its partner BioNTech also plan to start testing the vaccine in babies as young as 6 months in the coming weeks. But no approval or authorization is expected for younger children before the new school year starts at the end of summer.

Data about Moderna's COVID-19 vaccine for children as young as 5 will likely be available in September or October, Moderna told CNN, and the company plans to apply soon for FDA authorization for use of its vaccine in youths as young as 12.

The rollout has been quick in the younger age group; more than 3.5 million people ages 12 to 15 have already received at least one dose of the vaccine. Half of those 12 and older have now been fully vaccinated, according to data published Tuesday by the US Centers for Disease Control and Prevention.

But the FDA says it will be seeking more deliberate study for authorizing use of the vaccines in kids 11 and under.

Pfizer has applied for full approval, called a biologics license application or BLA, for its vaccine in people 12 and older. Moderna is expected to. So the committee members will be asked to consider what would be needed both for emergency use authorization in children, and full approval. The FDA has broken the younger children into three groups: 6 to 11, 2 to 6 and six months to 2 years.

"What I think we're going to do with that meeting is we're going to decide what the parameters are for approval -- either through emergency use authorization or for licensure -- for much younger age groups," VRBPAC committee member Dr. Paul Offit, director of the Vaccine Education Center at the Children's Hospital of Philadelphia, told CNN's Jake Tapper last week.

In briefing documents released ahead of Thursday's meeting, the FDA said it's usually acceptable to use what are called immunobridging studies to justify approval or emergency authorization of vaccines in children.

These look for evidence of immunity based on what's seen in adults who have volunteered in clinical trials.

Dr. Richard Besser, a pediatrician and president and CEO of the Robert Wood Johnson Foundation, on the Delta COVID-19 variant and COVID-19 vaccine testing for kids 5-11.

In the case of coronavirus vaccines, the FDA said, it would accept data on neutralizing antibodies -- the virus-attacking immune system proteins that are generated by vaccination. So instead of vaccinating a group of children and waiting to see if any become infected, companies could instead run blood tests to see if the vaccines generated an immune response.

Because COVID-19 has not caused the same level of serious disease in children as it has in adults, the FDA said companies will have to make a strong case for authorizing their use in children.

FDA usually asks for safety data in between 500 and 3,000 children in considering a new pediatric vaccine. "Since COVID-19 vaccines represent a new class of vaccines, with many of the lead candidates based on new platform technologies, an appropriate overall pediatric safety database would approach the upper end of this range," it said in the briefing documents.

"Therefore, clear and compelling evidence to support the safety of the vaccine would be expected to justify its authorization for emergency use in millions of healthy children."

Experts will be asked to consider the possibility of a phenomenon called vaccine-enhanced disease -- when vaccinated people get sicker when infected than unvaccinated people do. This happened in 2017 with a dengue vaccine used in the Philippines. So far, there's been no evidence coronavirus vaccines can cause this, the FDA noted.

Doctors will also be asked about the possibility of a condition called multisystem inflammatory syndrome in children or MIS-C, which is seen in some kids who have been infected with coronavirus and which is theoretically possible after vaccination, but hasn't been seen yet.