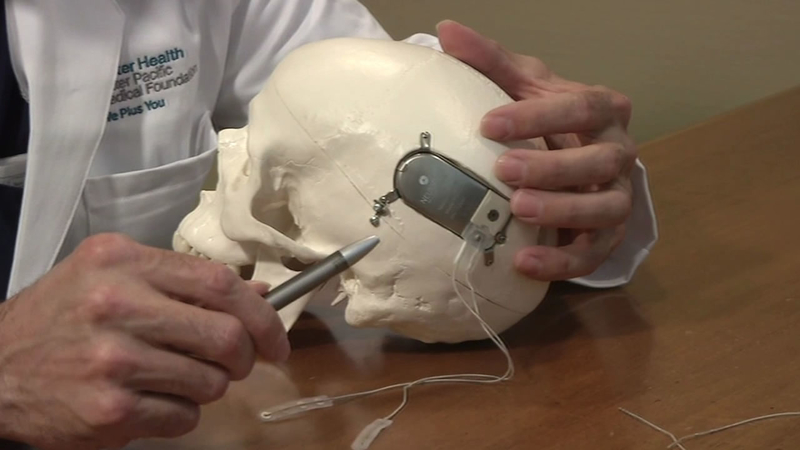 SAN FRANCISCO (KGO) -- A cutting edge surgery ABC7 News first profiled while it was still in clinical trial is now becoming routine at one Bay Area hospital. It is bringing relief to patients with seizures so severe, it can disrupt their lives.

When we first met Monica Lovelace, the mother of two from the Central Valley, had been experiencing severe epileptic seizures for much of her adult life.

Lovelace said, "My heart starts racing like crazy and then I black out."

But a small implantable device would improve Lovelace's symptoms dramatically. She became one of the early patients in a clinical trial at California Pacific Medical Center in San Francisco. The device known as NeuroPace is an electronic stimulator that can read the signals in the brain that precede an epileptic seizure.

Peter B. Weber, M.D. from California Pacific Medical Center said, "When it senses those signals, it sends another small electrical pulse back to that area to try to abort the seizure."

Once implanted, the NeuroPace is tuned to the brain waves with the help of external software. According to neurosurgeon Weber, the device was effective in more than 60-percent of patients, with a significant number having their siezures cut by half. The results were so encouraging, that six months ago, the FDA approved NeuroPace for the treatment of epilepsy.

Weber said, "It gives hope to a segment of people that previously had very little to hope for."

Surgeons at California Pacific are now implanting the device in qualified patients who do not respond to medications or other treatments. In most cases those procedures are also covered by insurance.
For most patients, they offer the chance for the kind of improvement Lovelace experienced during the trial.

Lovelace said, "Last month I went a whole month without a seizures, which was like whoa."