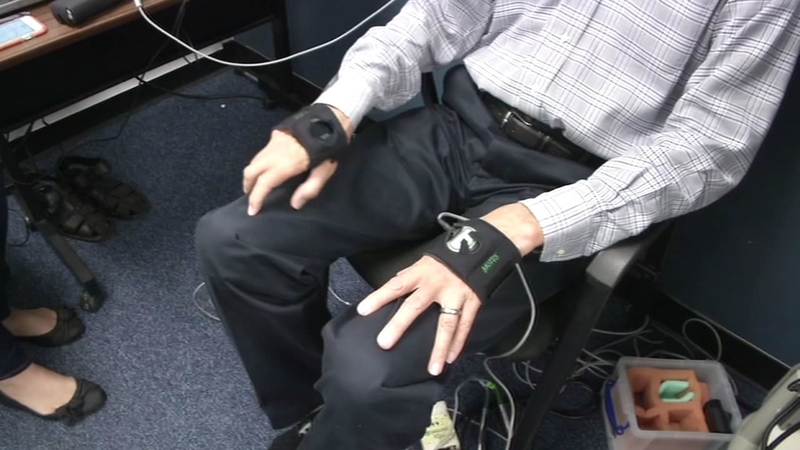 STANFORD UNIVERSITY, Calif. (KGO) -- Bay Area researchers are working to perfect a technology that uses electricity in the brain to fight debilitating diseases and it could soon become much more effective.

Watching Jim Wiseman's hand tremor is like tracking a passing storm, it stops the moment researchers at Stanford University turn on a surgically implanted device that keeps his Parkinson's symptoms in check.

The device is known as a deep brain stimulator, or DBS. It floods the brain with electronic signals, essentially calming the patient's neural pathways in a percentage of cases.

"The DBS literally just gets rid of it," Wiseman said.

Stanford neurologist Helen Bronte-Stewart believes that stimulation could be far more effective if it were more precisely targeted.

"This is how we've been doing brain pacing for the last 30 years. The brain pacing, or deep brain stimulator is on all the time," Bronte-Stewart said.

Now, Bronte-Stewart and her team are working to make DBS behave more like modern computerized pacemakers, which only activate when a patient's heart beat gets out of rhythm.

To accomplish that in the brain, Wiseman wears a sensor that detects when his tremors are starting.

"And we're actually programming a computer that will then adjust the neuro-stimulation, based on the patient's symptoms," Bronte-Stewart said.

The sensor sends a signal to the miniature computer, which tells the stimulator when and where to activate and at what power levels. By tweaking the settings, the Stanford team is hoping to find the precise electronic frequencies needed to control his tremors, without blanketing his brain with electricity.

"What that means is that the stimulator is not on for as long as it would be. It might be at a lower voltage, and therefore we may not see some of the side effects that we can sometimes see with deep brain stimulation," Bronte-Stewart said.

Beyond safety, Bronte-Stewart believes the system known as closed-loop DBS will allow researchers to target multiple symptoms, such as disrupted muscle motion, perhaps someday adding sensors that adjust the settings if a patient is sitting or walking.

"Our goal is that the patients shouldn't have to worry about it. That the pacemaker will seamlessly adjust itself based on what the patient's doing," Bronte-Stewart said.

Freeing patients, like Jim Wiseman, to live their lives just a seamlessly.