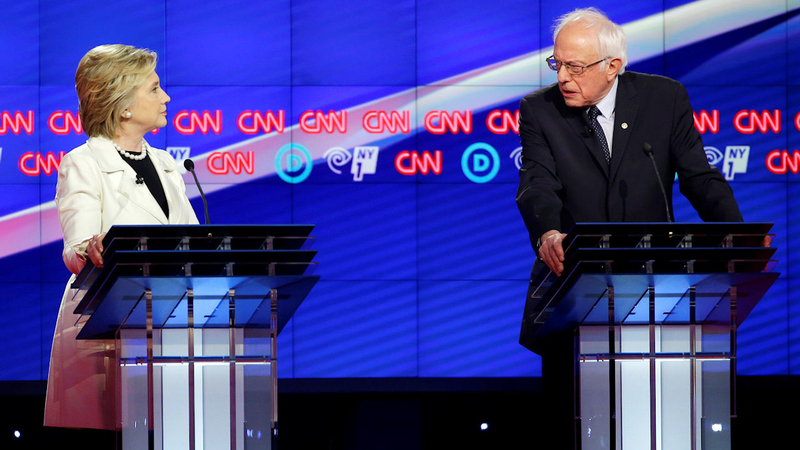 The showdown in Brooklyn came at a pivotal moment in the party's primary campaign, with Clinton leading in the delegate count but Sanders generating huge enthusiasm for his surprising candidacy. The debate also left no doubt that a rivalry that once centered on wonkish policy disagreements has turned strikingly personal.

The Vermont senator took a biting and often sarcastic tone as he sought to chip away at Clinton's credibility on issue after issue. He went as far as to suggest that her labeling of certain criminals as "superpredators" when she was first lady was "a racist term and everybody knew it was a racist term."

Sanders also cited Clinton's support for the unpopular Iraq war and for free trade agreements, as well as her willingness to accept money through a super PAC, as evidence that she lacks the needed judgment to lead the nation. Still, he backed away from previous statements questioning Clinton's qualifications, saying the former secretary of state does have the "experience and intelligence" to be president.

Clinton made little effort to hide her irritation with Sanders' implication that she is unqualified, saying that while she has been "called a lot of things in my life, that was a first." She repeatedly linked herself to President Barack Obama, who remains popular among Democrats, suggesting Sanders' criticism of her amounted to condemnation of the president.

Clinton also cast Sanders as a policy lightweight who is unprepared to implement even his signature proposals, including breaking up big banks. And she chided Sanders for chuckling during an exchange on gun control, an area where she has painted him as cozy with gun dealers and manufacturers.

"It's not a laughing matter," she said. "I take it really seriously because I have spent more time than I care to remember being with people who have lost their loved ones."

The debate was the first for the Democratic candidates in five weeks. It came ahead of Tuesday's primary in New York, a high-stakes contest with a huge cache of delegates at stake.

For Clinton, a win in a state that twice elected her senator would blunt Sanders' recent momentum and put his pursuit of the nomination further out of reach. A Sanders upset over Clinton would shake up the race, raising fresh concerns about her candidacy and breathing new life into the Vermont senator's campaign.

The Democratic primary has been fought for months on familiar terrain. Clinton has cast Sanders' proposals for breaking up banks and offering free tuition at public colleges and universities as unrealistic. Sanders has accused Clinton of being part of a rigged economic and political system, hammering her repeatedly for giving paid speeches to Wall Street banks and refusing to release the transcripts.

Clinton continued to struggle to explain why she has not released the transcripts, saying only that she'll do so when other candidates are required to do the same. She tried to raise questions about Sanders' own openness for not releasing his income taxes.

The senator pledged to release his most recent tax returns on Friday, and said there would be "no big money from speeches, no major investments" in the disclosures.

The candidates also sparred over raising the federal minimum wage, with Sanders expressing surprise as Clinton voiced support for efforts to set the hourly pay rate at $15, the level he has long backed.

"I don't know how you're there for the fight for 15 when you say you want a $12 minimum wage," he said. Clinton then clarified that while she does support a $12 per hour federal minimum wage, she would sign legislation raising that level to $15.

Sanders, whose campaign has focused squarely on economic issues, showed more fluency on foreign policy than in previous debates, particularly during an extended exchange on the intractable conflict between Israel and the Palestinians. He urged the U.S. to be "even-handed" in dealing with both sides and said Washington must acknowledge that Israel isn't right all of the time.

Clinton highlighted her involvement with Mideast peace efforts as Obama's secretary of state, saying pointedly, "Describing the problem is a lot easier than trying to solve it."

Sanders has won a string of recent primary contests. But because Democrats award their delegates proportionally, he's struggled to cut into the lead Clinton took earlier in the voting. He's also failed to persuade superdelegates - the party insiders who can back the candidate of their choice regardless of how their states vote - to switch their loyalties from Clinton.

Clinton has accumulated 1,289 pledged delegates from primaries and caucuses while Sanders has 1,038. Her lead grows significantly when the superdelegates are added in: 1,758 for Clinton and 1,069 for Sanders.

It takes 2,383 to clinch the Democratic nomination. Sanders would need to win 68 percent of the remaining delegates and uncommitted superdelegates to reach that figure.

Despite his long mathematical odds, Sanders has vowed to stay in the race through the party's convention in July. Backed by legions of loyal supporters, he's amassed impressive fundraising totals that give him the financial wherewithal to do just that.