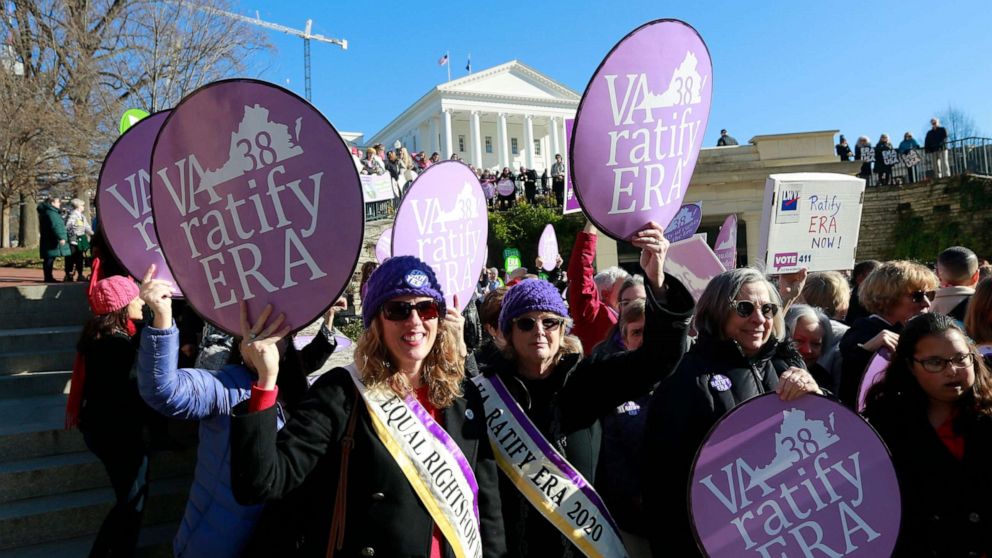 The long-gestating proposal to create an Equal Rights Amendment, or ERA, in the U.S. Constitution passed a historic threshold Wednesday when Virginia's state legislature ratified the amendment. However, legal experts say there may be some legal roadblocks to its adoption.

The Virginia House of Delegates and state Senate, where Democrats recently gained a majority after 20 years, both voted to ratify the amendment, which states "equality of rights under the law shall not be denied or abridged by the United States or by any state on account of sex." This marks the 38th state in the nation to ratify the amendment, the minimum for the resolution to be enacted in the U.S. Constitution.

Several state lawmakers said the time had come for the amendment, which was first issued by Congress in 1972, and women around the country needed their rights cemented into the Constitution.

"Today rather than single out someone rather than leave someone behind, we are making an affirmation of who we are," Del. Danica Roem said during the House vote.

The amendment would provide women across the country with more protections and could be used to help set new laws concerning areas such as equal pay and gender discrimination, according to Carol Jenkins, co-president and CEO of the ERA Coalition/Fund for Women's Equality. She noted that the amendment has been called for since 1920 and was first introduced in Congress 1923 by activist Alice Paul.

"It's taken almost a century, but it's closer than we have ever been. We're determined to cross the finish line," she said.

The road to full amendment's full adoption, however, is still murky as the measure is tied to a previously issued deadline that expired more than 30 years ago. Legal experts predicted that the ERA will have to go through some battles in court.

After Congress passed the amendment's resolution in 1972, it enacted a deadline of seven years for the measure to get its 38-state minimum ratification. The deadline was extended to 1982, but by that time, only 35 states ratified. Three years ago, Nevada ratified the amendment, followed by Illinois the next year.

The U.S. Department of Justice's Office of the Legal Counsel (OLC) released an opinion last week that stated the amendment "is no longer pending before the States," because of the expiration. The National Archives and Records Administration, which has to certify the amendment, said in a press release it would comply with the OLC's opinion save for a court order.

ERA proponents contend that the deadline for the measure's passage was written in the resolution passed by Congress in 1972, but not in the wording of the amendment itself that states are ratifying. Furthermore, advocates say Article V of the Constitution explicitly states that an amendment proposal be ratified once the 38-state limit is met, with no stipulation for deadlines.

Saikrishna Bangalore Prakash, a professor at the University of Virginia School of Law, told ABC News it is likely that a lawsuit will be filed against the National Archives that will compel them to ratify the amendment if the threshold is met.

Prakash, who published a paper on the ERA in the Harvard Law Review last year, said contentions against the ERA deadline have grown since the 27th Amendment (on congressional pay) was passed in 1992, more than 200 years after Congress made a resolution for its adoption.

"The same argument could be made for the ERA," he said.

Virginia's Attorney General Mark Herring said in a statement last week in response to the OLC opinion that he would fight any opposition to the ERA passage, according to The Associated Press.

"Any reliance on the Office of Legal Council's memorandum improperly injects the executive branch into the amendment process," Michelle Kallen, deputy solicitor general for the Virginia AG's office, testified during the Virginia House of Delegate's Privilege and Elections Committee Tuesday.

There are currently bills in the U.S. House and Senate that call for the elimination of the deadline from the ERA resolution, and those would prevent any legal barriers for the amendment, Maria Vullo, the chair of the board of the ERA Coalition, told ABC News.

"The one thing we are advocating strongly is to eliminate this argument that there was this time limit for ratification," Vullo said.
Report a correction or typo
Related topics:
abc newsnational
Copyright © 2021 ABC News Internet Ventures.
More Videos
From CNN Newsource affiliates
TOP STORIES
Storm timeline: Lightning, more rain still on the way to Bay Area