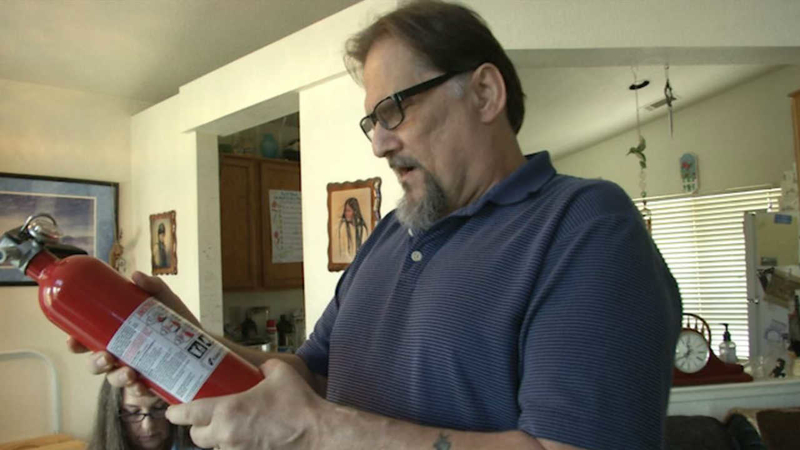 AMERICAN CANYON, Calif. (KGO) -- A recall of fire extinguishers in November set off an alarm for one local family. They ran into delays trying to get theirs replaced.

This was part of a recall of 37 million fire extinguishers.

Eddie Berengue doesn't take any chances when it comes to fire at his American Canyon home. He's equipped his home with a fire extinguisher, a sprinkler system and smoke alarms.

"My younger sister was burned pretty severely on her arms in a kitchen fire. Fires are just nothing to play with," warned Eddie

Eddie and his wife, Judith, saw the voluntary recall of his fire extinguisher on the news.

Eddie called Kidde. "The person I spoke to acted as if I was out of my mind. Recall. What are you talking about? We haven't been notified about any recall," he said.
Eddie says they told him to call back the next day after Kidde's staff was briefed.

It was then that the company told him he could expect a new fire extinguisher in 15 days.

"I waited 20 days. I called back. Oh, what was your name again? We don't have any record of you calling," he said.

They were especially concerned because their grandchildren lived with them at the time.

"In case there's a fire or something like that, that would just be horrible. For something that senseless," said Eddie

The couple says Kidde blamed their wait on a crashed computer system.

A spokeswoman told us, "It appears there was some information missing from his recall submission. Once we were made aware of the issue, we expedited shipment of a replacement unit."

Eddie and Judith are grateful for the help they received.

"Nothing would have been resolved unless you came in and helped us so thank you," said Judith.

Kidde tells us the safety of its customers is its priority.