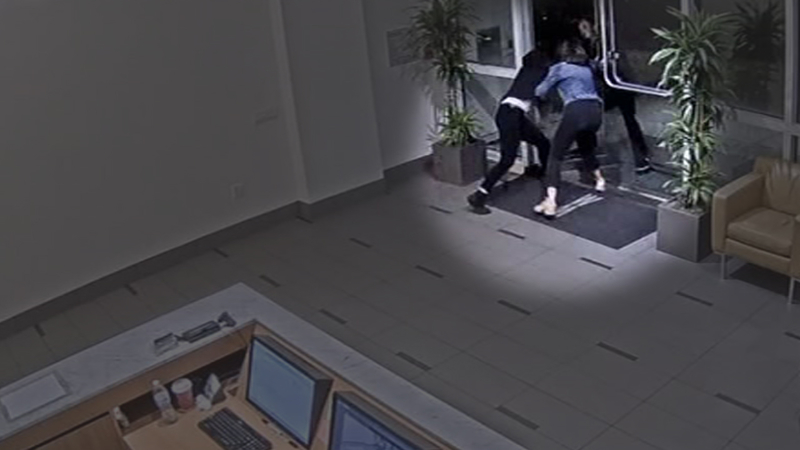 SAN FRANCISCO (KGO) -- It's supposed to feel good to get home after a long day. But instead of relaxing, one woman ended up fighting for her life.

In stunning surveillance video, Paneez Kosarian is seen trying to get through the front door of her building, when a man, believed to be homeless, grabs her, pulling her away from the door and onto the ground.

She struggles to get away, finally being able to crawl inside as the man grabs her legs. He tries again to get inside, but they're able to close the door.

40 seconds of of terror. Paneez Kosarian was trying to get home, when a man grabbed and pulled her outside.

Even after his arrest, Kosarian says his words still haunt her.

"He kept saying, 'What are you going to do call the cops?'" Kosarian recalls. "They don't care. They're not going to do anything to me. And he kept repeating that to me. This guy had no fear of the city or the cops and that's to me a new level of fear for me because if the cops are not here to protect us then what is protecting us from getting hurt over and over again?"

"I would say if you ever don't feel safe call 911, give a description of the person and the situation, we'll take care of it for you."

Kosarian says it took officers 30 mins from the time of the first call to arrive. But SFPD says it was a lower priority because it was reported as a man standing outside. When things escalated they got an officer to her house in three minutes.

Kosarian's house is right next to the site of the Embarcadero SAFE navigation site. She's concerned when it's built there will be more incidents like the one she experienced.

The group Safe Embarcadero for All is suing the City of San Francisco to stop the proposed homeless navigation. Board member Wallace Lee issued a statement which read in part, "This nighttime attack against an innocent woman who was simply trying to get home is a frightening example of what our community faces now. We live in concern and with fear of what may come because of the inability of the City to listen to the concerns, and follow its own rules, in the creation of new homeless centers and facilities."

Kosarian hopes her experience will serve as a wakeup call.

"This should never happen to anyone," Kosarian says. "I was trying to get into my own house."

Police say when the navigation center opens there will be additional security measures in place, but it is too soon to say what they will be.

We reached out to supervisor Matt Haney, supervisor of the district where the incident happened.

He said in a statement:

"I am very sorry to hear about this horrific attack on a resident, and my office is here to support the victim in any way that we can. I have been in close touch with the Police Captain and am grateful that SFPD was able to apprehend the perpetrator and hold him accountable.

I am working proactively every day with SFPD and city agencies to implement effective solutions to protect public safety, dramatically expand mental health and substance use treatment, and implement robust street outreach, community policing, and safety teams in the neighborhood.

I believe strongly that our neighborhoods and residents are safer when we implement effective accountability for crimes and ensure robust services and treatment for those who require it. I fought alongside the community to secure dedicated foot patrols for this area, and I am pushing for those to start sooner rather than later."

The man in the video has been identified as 25-year-old Austin James Vincent. SFPD says he has no local San Francisco address and is facing charges of False imprisonment, battery and attempted robbery. He is still in custody at San Francisco County Jail.