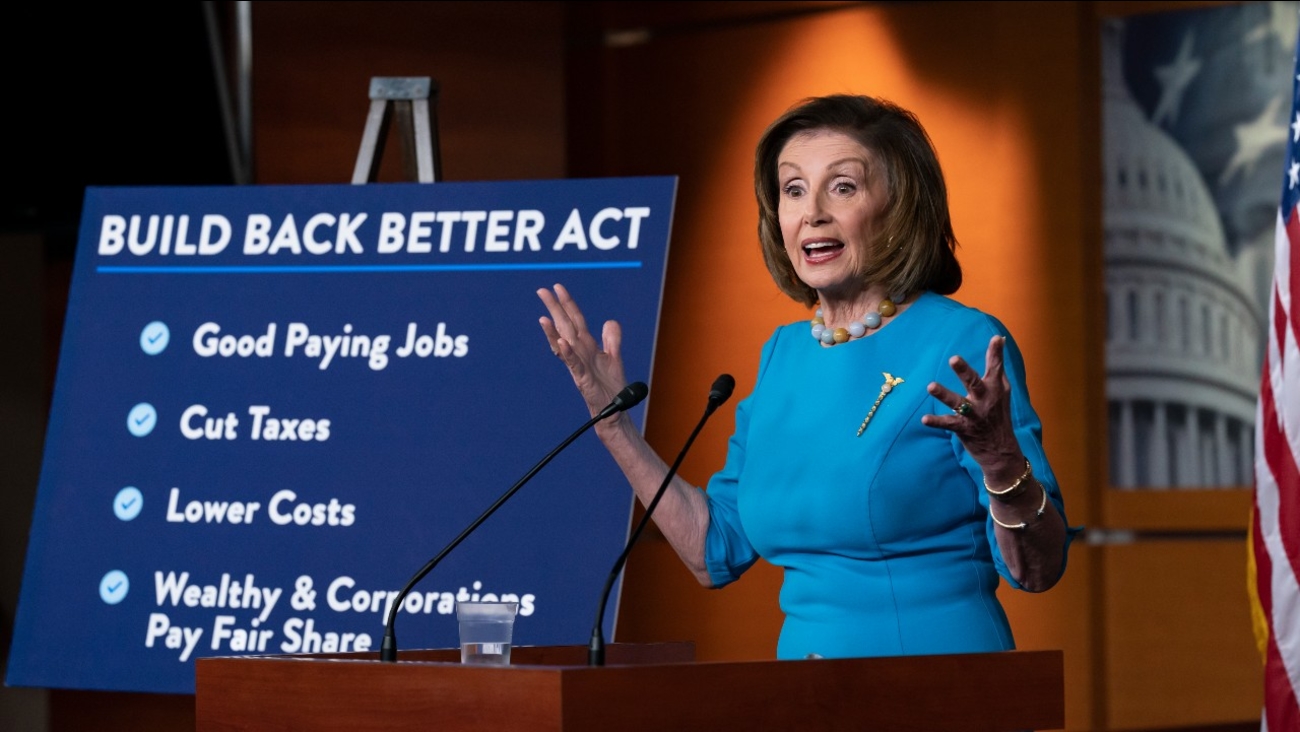 The House began final debate on the long-delayed legislation after the nonpartisan Congressional Budget Office said it would produce additional federal deficits totaling $160 billion over the coming decade. It also recalculated the measure's 10-year price tag at $1.68 trillion, though that figure wasn't directly comparable to a $1.85 trillion figure Democrats have been using.

House approval would ship the legislation to the Senate and end - though only for now - months of battling between Democrats' progressives and moderates over its costs and policies. It would also help Biden move closer to winning more of his domestic priorities at a time when his public approval is faltering badly.

"Build Back Better is a spectacular agenda for the future, with transformational action on health care, family care and climate," House Speaker Nancy Pelosi, D-Calif., said in a letter to her colleagues, using the name Biden gave the legislation. She said the measure "will make a significant difference in the lives of millions of Americans."

In one major difference that was expected, CBO estimated that by spending $80 billion to beef up IRS tax enforcement, the agency would collect $207 billion in new revenue over the coming decade. That meant net savings of $127 billion, well below the White House's more optimistic $400 billion estimate.

In a scorekeeping quirk, CBO formally estimated that the legislation would drive up federal budget deficits by $367 billion over the coming decade. The agency's budget guidelines technically require it to not count IRS savings when measuring a bill's deficit impact. But it acknowledged that the measure's true impact would produce added shortfalls of the lower figure - $160 billion - when counting added revenue the IRS would collect.

Biden and other Democratic leaders have said the measure would pay for itself, largely through tax increases on the wealthy, big corporations and companies doing business abroad.

Two weeks after centrists' objections forced Democrats to delay the measure, the party's divisions seemed all but resolved, for now. Facing uniform Republican opposition, Democrats can lose no more than three votes to prevail in the House.

Republicans said the legislation would damage an economy already racked by inflation, give tax breaks to some wealthy taxpayers and make government bigger and more intrusive. Missouri Rep. Jason Smith, the Budget Committee's top Republican, echoed the alliteration from "Build Back Better" to mock it.

"Bankrupts the economy. Benefits the wealthy. And it builds the Washington machine," Smith said.

Biden this week signed a $1 trillion package of highway and other infrastructure projects, which he's spent recent days promoting around the country. But he's been battered recently by falling approval numbers in polls, reflecting voters' concerns over inflation, supply chain delays and the persistent coronavirus pandemic.

After months of talks, lawmakers appeared eager to wrap it up, shelving lingering differences to begin selling the package back home. House Democrats said they were planning 1,000 events across the country by year's end to pitch the measure's benefits to voters, ahead of 2022 midterm elections in which Republicans have strong hopes for capturing control of the House and Senate.

House passage of the social and environment bill would send it to the 50-50 Senate, where Democrats have zero votes to spare. Significant changes there are likely due to cost-cutting demands by moderate Sen. Joe Manchin, D-W.Va.

Senate talks could take weeks, and the prospect that Manchin or others will force additional cuts in the measure was making it easier for House moderates to back the legislation Thursday. The altered bill would have to return to the House before going to Biden's desk.

When moderates delayed House passage of the bill two weeks ago, they said they wanted to make sure the CBO's projections for its costs were similar to White House numbers, which showed the measure essentially paid for itself.

The House's addition of a paid family leave program was also expected to increase the legislation's cost. That program faces objections from Manchin and seems likely to be dropped by the Senate.

Some moderates have already said projections over IRS savings are always uncertain and would not cause them to oppose the measure. Others have said the measure's roughly $555 billion in tax credits and other costs to encourage cleaner energy need not be paid for in the bill because global warming is an existential crisis.