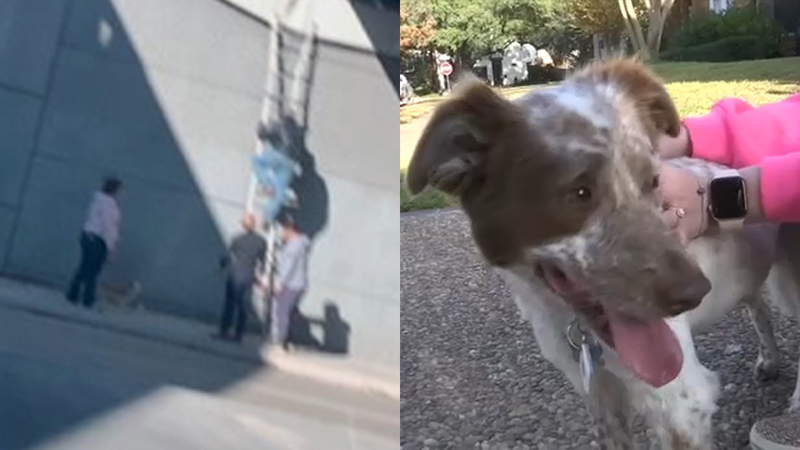 Man looking for strangers who climbed freeway wall to save dog

HOUSTON, Texas -- A Montrose dog owner is searching for the two men who provided a ladder in order to scale a freeway wall to rescue his lost dog.

"She disappeared on Thursday," said Avrim Fishkind about his dog, Sookie. "There is a gate behind us, and the people were painting the house and they left the gate open."

That was the beginning of a frantic four-day search to find Sookie, who typically can be trusted off of a leash and had never run away until last week.

A blurry photo shows four people trying to save the family dog, who was laying just a few feet underneath the freeway at Spur 527.

In the photo, three people are seen standing around a ladder propped up against the freeway wall in an attempt to bring the dog down.

"You could tell she was terrified," said Patricia Alnaser, who was one of several people who stopped to help.

According to another Good Samaritan, Casey Joshi, the rescue lasted several hours and included the help of several people.

"The two men had gotten a can of food," Joshi said.

Eventually, Sookie was rescued, but not before she managed to run away again. She was later captured. Joshi searched online posts for missing dogs and spotted one for Sookie.

The dog was dehydrated, but otherwise, in good condition. Before names and contact information could be exchanged, the two men who brought the ladder had already left.

So far, Fishkind has located two of the people who helped with the rescue and is now asking for the public's help in identifying the two other men involved who went to great lengths to help get his dog to safety.

"I want to thank whoever you are," he said. "They had to get to the airport so, I don't know anything about what happened to them. They are just two men that I really have to thank."

QUICK-THINKING RESCUER: A Houston man's heroics are going viral after he rescued a dog when its leash got stuck in the doors of a moving elevator.