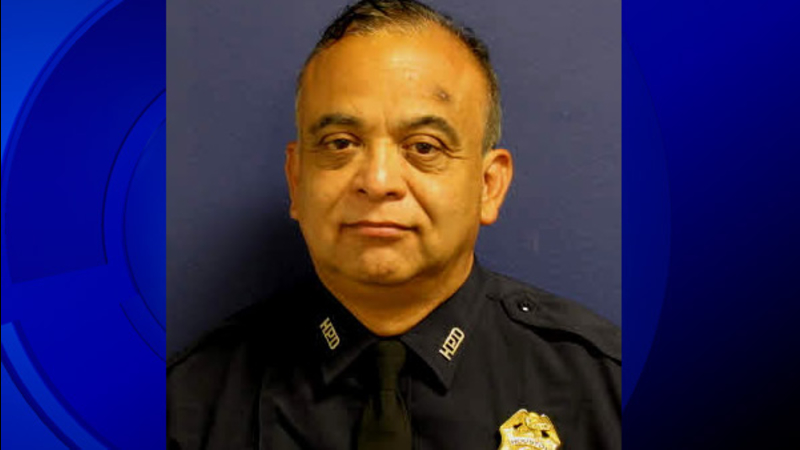 HOUSTON -- A Houston police officer drowned in his vehicle while trying to report to duty during Harvey's devastating flooding.

Sgt. Perez left his home in heavy rain at 4:30 a.m. to report to an investigation, even though his wife urged him to stay home because of the dangerous driving conditions.

Sgt. Steve Perez died in the floodwaters on the way to work Sunday

Houston Police Chief Art Acevedo said Sgt. Perez drove for about two and a half hours trying to find a safe way to his station. He called his command to report he could not get to his duty station.

Sgt. Perez followed protocol, which was to go to a second station in Kingwood.

"I've got work to do," Perez told wife, who urged him to reconsider reporting for duty.

On Monday, the chain of command realized Sgt. Perez had not shown up for work. They knew the dedicated officer would not have simply failed to show up.

Chief Acevedo said, "Every day we ask men and women to show up in good and bad conditions. Today I simply say our heart is saddened."

Perez served on the force for 34 years and was currently assigned to the traffic enforcement division.

On Monday evening, the search area was narrowed to Hardy Toll Road and Beltway 8. The dive team was called out, and the Cajun Navy volunteer search and rescue force was called to assist in the effort to locate Sgt. Perez.

The floodwaters became treacherous and it was too dangerous to go out safely at the time. His body was finally recovered at 8 a.m. Tuesday.

Chief Acevedo became emotional at a press conference when he made the announcement. He said although the Houston Police Department has 6,500 employees, he knew Sgt. Perez.

As he became choked up, Chief Acevedo said, "Steve is one of the sweetest people I've ever met."

Our hearts are heavy, but we will get through this. #HoustonStrong pic.twitter.com/FhiyiNTDcQ

The fallen officer's family told him not to go, and he told them, "I have work to do."

Sergeant Perez fulfilled his purpose. His mission is complete. This city ought to celebrate his life. 9K police and fire working to serve.

The chief recalled tearfully asking Perez's widow, "How do you think he would have wanted to go? Watching or doing what he had been doing for 34 years?"

Perez "died in trying." RIP, sergeant. Houston thanks you and mourns all who have died in #HarveyFlood.

The sergeant was just shy of his 61st birthday. He leaves behind a wife, and a son and daughter.