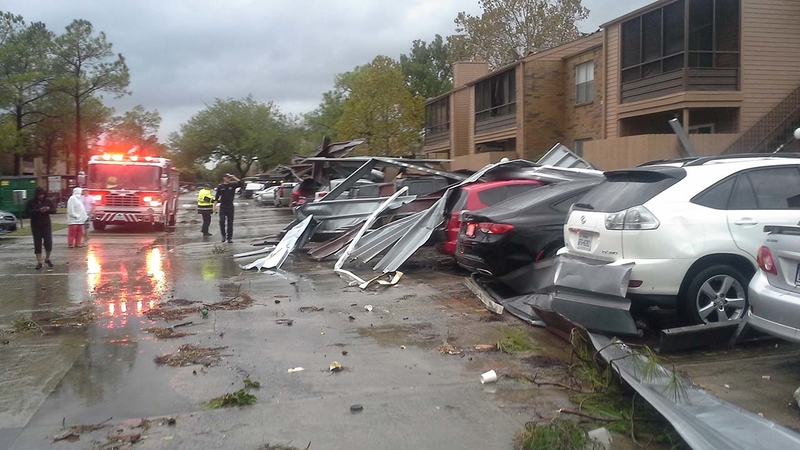 HOUSTON -- The death toll in Central Texas flooding has reached at least three after emergency services officials recovered a body. Another person is still missing.

Travis County Emergency Services spokeswoman Lisa Block says the body of man who was driving a vehicle Friday that was swept away near Elroy was recovered Saturday morning.

Block says several other people managed to escape from the flooded vehicle in the community that's southeast of Austin. She had no immediate details on where the victim was located or the survivors.

Block says a woman who was caught in floodwaters Friday near her home in the same area remains missing. Block says the woman's husband was rescued from the water.

Two other bodies were recovered Friday amid heavy rain and flooding in the San Antonio and Austin areas.
Some light rail service has resumed in Houston amid storms that flooded roadways and sent bayous out of their banks.

The Metropolitan Transit Authority of Houston reported limited rail service resumed late Saturday morning in parts of Houston. Officials had suspended all service on the nearly 23-mile light rail line due to heavy rain and flooding.

A separate flash flood warning covered parts of southeast Texas, including Orange, Jasper and Newton counties, until early Saturday afternoon. Flooding was predicted for the Beaumont area.
More than 70 people spent the night at shelters in Central Texas after storms and flooding threatened or damaged their homes.

Hays County authorities said Saturday that shelters in San Marcos housed 67 people. One in Kyle had seven evacuees, and one person spent the night at Wimberley High School.

The Lehman and Wimberley shelters will close Saturday as floodwaters receded and damage assessments began. The shelter at Miller Middle School in San Marcos remained open amid cleanup.

Hundreds of low-water crossings were closed Saturday in Hays County, south of Austin.

Meteorologist Patrick Blood says between 10 and 30 homes were damaged about 7 a.m. in a subdivision in eastern Harris County by a radar-confirmed tornado.

In the Houston suburb of Friendswood, one home had a collapsed roof from a tornado that hit about 5:30 a.m. Friendswood officials say no one was injured because the home's residents were away. About 30 other homes had minor damage.

Officials had previously reported that about 25 trailer homes were damaged and two people were injured at about 5 a.m. when a radar-confirmed tornado went through Alvin, located 30 miles south of Houston.

Blood says south-central Harris County, including Houston, has received up to 8 inches of rain since Friday.