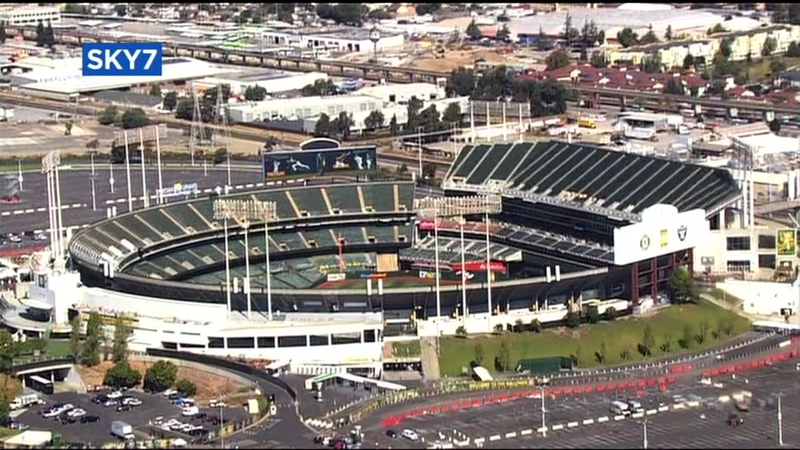 OAKLAND, Calif. (KGO) -- The 112-acre Oakland-Alameda County Coliseum Complex, which includes the stadium, Oracle Arena, and the surrounding parking lots, is on the precipice of major change.

Alameda County Supervisor, Nate Miley, expects the Board of Supervisors to vote unanimously Monday to sell their 50% share of the complex to the Oakland Athletics. If passed, the A's will begin a 190-day process of reviewing the real estate purchase before the sale is finalized.

"I think we're going to come up with a term sheet and it's going to get us one step closer to getting out of the sports business for the County of Alameda," said Miley.

The county wants out, in order to pay off debt incurred on the property during their 1995 renovation of the stadium, which brought the Raiders back to Oakland from Los Angeles.

The $85 million dollar price tag would pay off the debt.

Selling to the A's is also insurance... for the baseball team and Oakland, in case the team's plans to build a new waterfront ballpark at Howard Terminal fall through.

"And for some reason if it doesn't happen, then the A's need to have a landing spot in the City of Oakland. And if they own property in East Oakland at the present site where the Coliseum is, that would be their landing spot to build a new stadium in Oakland," explained Miley.

But that's just half the story... because Oakland owns the other 50% of the Coliseum complex. And a few months ago, the City of Oakland sued Alameda County over the sale of the complex, only to drop the suit last month, once they realized how important it was to play ball with the A's.

"The Raiders are leaving, the Warriors have left, the big question is what's going to happen to the A's," said ABC7 News contributor and Chronicle insider, Phil Matier, who explained that the City of Oakland wanted control of the entire Coliseum complex, but couldn't afford to pay off the County.

"In a political sense this is a tough one for City Hall. They may not like giving up control of that prime real estate with the promise of getting a baseball team, with the promise of getting a baseball somewhere in Oakland, but they might not have a choice because if Major League Baseball says it's all or nothing, well Oakland could wind up with nothing."

Oakland Councilman Larry Reid told ABC7 by phone Sunday night that the City is now also negotiating with the A's to sell or lease their half of the complex.

"I know the A's are going to do right by East Oakland," said Reid, who has been very concerned about how East Oakland residents will fare with a new Coliseum complex development, which is meant to include space for mixed-use housing, business, and sports.

"A sale represents progress for East Oakland and A's fans, and all of us working to keep the team rooted in Oakland. My greatest hope is that any sale of public land by the County includes generous community benefits, affordable housing, and ensures that the people who will benefit most are the residents of East Oakland."