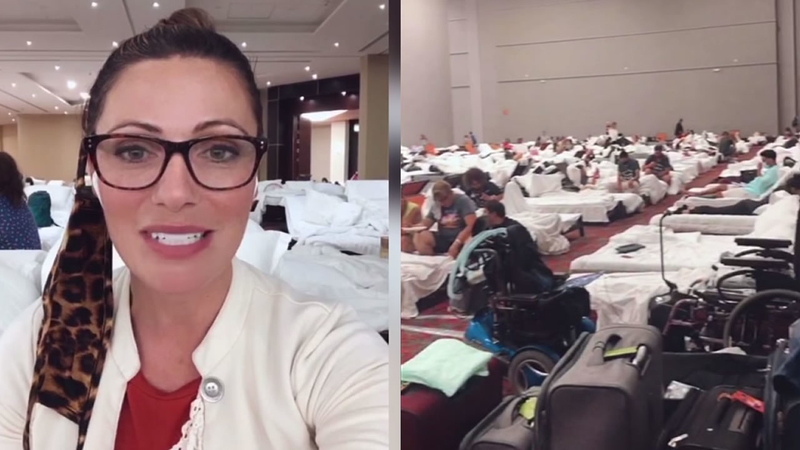 CANCUN, Mexico (KGO) -- As Hurricane Delta roars towards the Gulf Coast, a Northern California family is now sharing their close call with the storm while on vacation in Cozumel, Mexico.

"I'm from Northern California, I had never been in a hurricane and I didn't realize the extent of what a potential category 4 hurricane would be," explained Tiffani Morgan, a nurse from Lincoln, Calif. near Sacramento.

Morgan and her family were on vacation on the island of Cozumel when they were informed Monday evening that they were being evacuated to the mainland Cancun.

"We were told to pack our bags and that there would be a bus waiting for us the next morning," recalled Morgan "We were kind of bummed."

Hotel officials initially told the family that they would be put up in another sister resort, but when they arrived they were informed that they would be riding out the storm inside a large event center with hundreds of other stranded tourists.

Because the resort was out of beds, they pulled in pool lounge chairs to serve as beds.

"People are sleeping in hallways and on cots. People that don't have cots are sleeping on the ground," said Morgan.

But Morgan said she and her family were so impressed by the staff's efforts to take care of the evacuees.

"They have done their best to have entertainment," explained Morgan. "People are trying to make the best of it."

IN THE MIDDLE OF A HURRICANE: Storm chaser takes us inside Delta
EMBED More News Videos

What's it like in the middle of a hurricane as it's bearing down on you? A storm chaser takes us inside Delta.

The storm hit Cancun Tuesday night and Morgan said the resort property only appeared to suffer minor damage, but it's worse outside the resort.

"I hear that the roads are flooded in other areas and other hotels don't have power. We're running on a generator, so we are blessed as far as that goes," said Morgan.

The resort said they will put them into a hotel on Thursday and they can stay there for three more days if they want, but the Morgan family is trying to get out of there as soon as possible.

However, their flights have been canceled twice, but they are trying to keep a positive attitude.

"As 2020 has told us things don't go according to plan, all we can control is our attitude so we'll just make the best of it," said Morgan
Report a correction or typo
Related topics:
mexicodisasterstormu.s. & worldhurricane
Copyright © 2021 KGO-TV. All Rights Reserved.
RELATED
Delta regains major hurricane strength as it heads toward Louisiana
HURRICANE
Video takes unprecedented view from the inside of a hurricane
What not to donate in wake of Hurricane Ida devastation
Dolphin rescued after being 'pushed into canal' by Hurricane Ida
Wife saw gator attack husband in Ida floodwaters, officials say
TOP STORIES
Parents charged in MI school shooting; Teen's mom texts 'don't do it'
Omicron likely to push back return-to-office dates, experts say
Our America: Accomplices - The Story of Ady Barkan | Full Episode
Man who attacked 84-year-old in SF earlier this year released
How omicron variant is changing holiday travel plans
Proposal to offer $50K signing bonus to attract officers to OPD
Things to do in the Bay: Deck the Halls pop-up bar, SF Youth Ballet
Show More
Widmer World Christmas display returns to Pleasanton
LA County reports its first case of omicron COVID variant
Will travel insurance cover you if you catch COVID abroad?
California's water districts to get 0% of requested supplies in 2022
SF Transgender Initiatives director steps down to focus on US policy
More TOP STORIES News