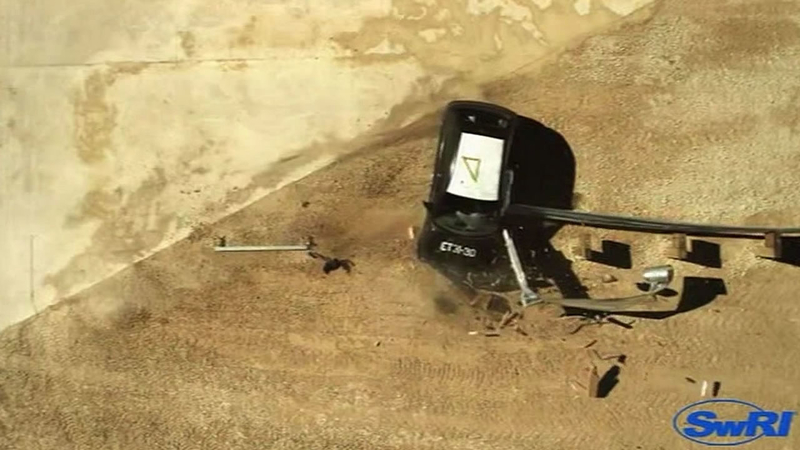 Critics insist problems with the highway guardrail are responsible for deaths and injuries here in the Bay Area and across the country. The I-Team has been covering this issue for two years.

These crash tests are one, important step toward analyzing the safety of the ET-Plus guardrail end piece. Another task force will check this data and real-world crashes, and issue findings by early summer. These latest crash test results do not end the controversy.

On the call, FHWA Associate Administrator for Safety Tony Furst said, "We concluded that at the height of 31 inches, the ET-Plus end terminal meets the applicable crash test criteria."

That's welcome news to Trinity Industries, the Dallas-based company that makes the ET-Plus.

"The ET plus now is the most tested guardrail end system on the nation's roadways and the release today of the information just confirms that it passed all eight tests," Jeff Eller from Trinity Industries said.

Trinity and the federal safety inspectors held the tests, after lawsuits claimed the ET-Plus could fail. It's supposed to absorb the impact and allow the guardrail to ribbon off to the side. But, in some cases, the guardrail has sliced through cars.

Among accidents across the country involving the ET-Plus, the I-Team first reported about 24-year-old Darryl Blackmon -- a Bay Area football star who died on Highway 101 in Mill Valley last November, when his car hit an ET-Plus and rolled over.

"He should not have been taken away in that... I mean if you fell asleep at the wheel, fine, but that equipment should have stopped that car," Florence Blackmon, Darryl's mother said.

Trinity Industries told the I-Team, there are so many variables in crashes like Blackmon's, that it's irresponsible to blame the end terminal. You have to know the vehicle's speed, the angle of impact, the driver's condition before the crash -- all issues still under CHP investigation in the Blackmon case.

The I-Team spoke with him from Dallas.

Noyes: "What's your reaction to the announcement today?"
Lawrence: "I'm disappointed, they had an opportunity to do the right thing."

Lawrence claims officials at the FHWA are trying to make sure they don't get blamed for overlooking the crisis for years, and that they glossed over one especially troubling test.

"You can see what happened to that car. Nobody on the road wants to be a driver of that vehicle with a spear tip of the guard rail slamming into your door," Lawrence said.

On the conference call, the FHWA said the amount of damage to the door exceeded guidelines, but added, "A driver exposed to the crash conditions in this test would have been unlikely to have been at risk of serious injury from the folded rail impact to the driver side door."