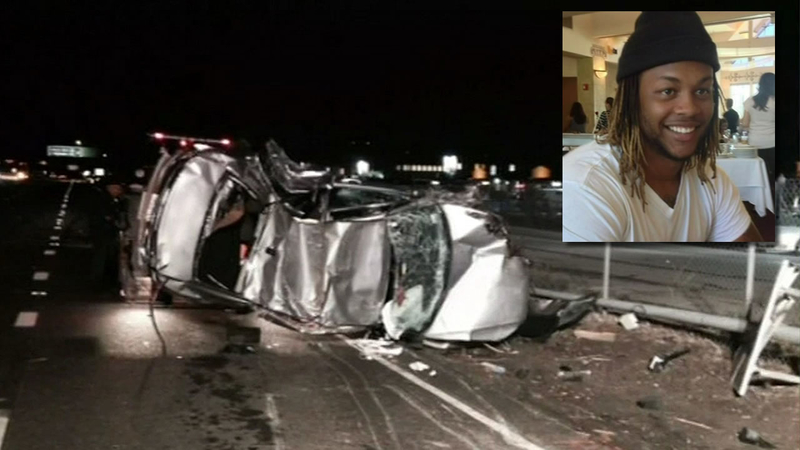 SAN FRANCISCO (KGO) -- A 24-year-old Bay Area football star is killed in a violent crash and experts tell the ABC7 News I-Team he could have survived it if it hadn't been for the guardrail he struck.

Darryl Blackmon died after an accident Saturday morning in Marin County. The type of guardrail he slammed into has been blamed for deaths and injuries across the country.

We don't know if Blackmon fell asleep, was distracted or impaired when he hit the guardrail four days ago. The toxicology screen will take another week or so to process. And the CHP is downloading data from the car's black box to see how fast he was going. However, a guardrail maker who has sued the other company that made the guardrail Blackmon hit says, he should have survived the crash.

Friends tell the I-Team Blackmon may have been coming home from work as a bouncer at a San Francisco bar, when his car crashed in Mill Valley 4:30 Saturday morning.

Blackmon was 6'7" tall, he excelled on the Berkeley High football team, played at Kansas State and even tried out for the 49ers in April. After an injury, he hoped to try again next year.

Through it all, he volunteered coaching Berkeley kids with Pop Warner football coach Todd Walker. Walker said, "Every time I see him, he's just nice, big baby to me. He's just a nice guy, well raised by his mother."

After Blackmon died in the crash, Caltrans crews didn't clean up very well. The I-Team found pieces of his Chrysler Sebring along Highway 101. There was part of the bumper assembly, a headlight, even a bio-hazard bag full of bloody gloves used by emergency personnel.

But, they did take special care of the guardrail end piece involved in the crash. The I-Team couldn't find it in the recycle pile at the Caltrans maintenance yard in Petaluma on Tuesday. We did find the main beam involved, even pulled the bumper out of it and verified it was Blackmon's through an identification number.

After several phone calls and hours of wrangling, Caltrans took the I-Team deep inside a warehouse and behind black tarps to show us the end terminal or "head" - it was an ET-Plus. And Josh Harman was there -- he's a guardrail manufacturer who has sued the company that makes the ET-Plus, Trinity Industries.

"That head is responsible for the death of that boy, there's no question," Harmon said.

Here's how the ET-Plus is supposed to work. The force of the car pushes the end terminal down the guardrail and it flattens the "W" into a smooth ribbon of steel that comes out the side. That process slows the car.

In this case, you can see the guardrail bulging out of the ET-Plus channel and how the guardrail folded right at the end terminal.

"They lock up and then as you see with the gouge right there, it buckled over, knuckled up, and ripped off and allowed the vehicle through," Harman explained.

The guardrail flipped onto the highway, and the Sebring continued past, smacked into a sign pole and stopped upside down. After repeated incidents like this one and lawsuits filed against the company, 39 states have now banned the ET-Plus, but not California.

Haus: "We want to have any as much information, as much solid data as possible before we make a decision."
Noyes: "That's terribly frustrating to people like the family of Darryl Blackmon."
Haus: "Well, of course, our sympathies and our hearts are with the families right now."

The I-Team found stacks of new ET-Plus heads in the Caltrans yard and discovered Caltrans installed another ET-Plus at that same location, the day Blackmon died.

"It's unconscionable that these people are just ignoring these obvious facts and I will not stop. I will not silent. People are dying if something isn't done and they'll continue dying," Harman said.

The I-Team reached out to Blackmon's mother and a close friend said she is too distraught to speak with us right now. This was her only son.

Trinity Industries emailed us a statement saying, "Our sympathies go out to the Blackmon family over their loss... At this time, it would be premature to speculate on the particular details involving this accident."