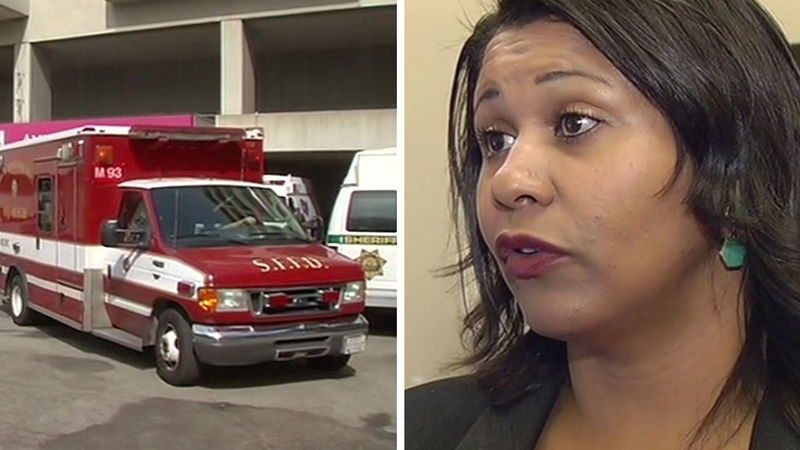 SAN FRANCISCO (KGO) -- The San Francisco Fire Department is facing a crisis. Tuesday afternoon, Supervisor London Breed made a public announcement of "no confidence" in Chief Joanne Hayes-White. The move centers around plummeting ambulance response times and other controversies in the department. The I-Team has been investigating the issue for weeks now and has these latest developments.

Breed is pointing the finger at Hayes-White. These issues have been festering for years and who suffers the most? The public. They are the ones who have to wait up to two hours for an ambulance to take them to the hospital.

The supervisor expressing "no confidence" in the fire chief has some credentials in the field -- Breed served two years on the Fire Commission before becoming supervisor.

"The people of San Francisco pay the fire chief over $300,000 a year. I think we are entitled to expect at least a minimal level of service and safety," Breed said.

Breed told the I-Team, she has lost confidence in Hayes-White because of her handling of the fire department's many controversies over the years -- the firefighter who apparently had been drinking on the job who hit a motorcycle and left the scene, the two fire trucks who rolled over a young passenger from the Asiana crash, killing her, and now, ambulance response times.

When asked if she wanted the chief to resign, Breed said, "I think if she believes that she can't do the job the way the job needs to be done to protect public safety, she has to make that decision for herself."

At a Fire Commission meeting on Aug. 28, 2014, the firefighters union concluded San Francisco ambulance service is in "critical condition".

While fire trucks and engines are responding quickly, patients are having to wait for an ambulance to transport them to the hospital.

"The wait times are going anywhere from 30, 40, 50, to 60 minutes and we have had one as long as two hours," San Francisco Firefighters Union president Tom O'Connor.

The problems are personnel and equipment. Under Hayes-White, the department has allowed the number of paramedics to drop from a high of 200 to 130.

Any given day, more than a quarter of the city's ambulances are in the shop at Station 49.

"When you have ambulances with 200,000 miles on them and $200,000 in maintenance, you need new ambulances. If someone gives you $16 million, you need to buy those ambulances and get them on the street," O'Connor said.

"I'm going to look at why it wasn't spent at the time when we had the money there. Were there procurement blockages? Are departments pointing the finger at each other? Sometimes that happens," Mayor Ed Lee said.

Lee said he has convened a task force to tackle these issues and he stands behind Hayes-White.

"I have confidence in the chief, Chief Hayes-White. I've known her for many years and I know that she's doing her best," Lee said.

The I-Team spoke with Hayes-White late Tuesday afternoon about Breed's lack of confidence in her.