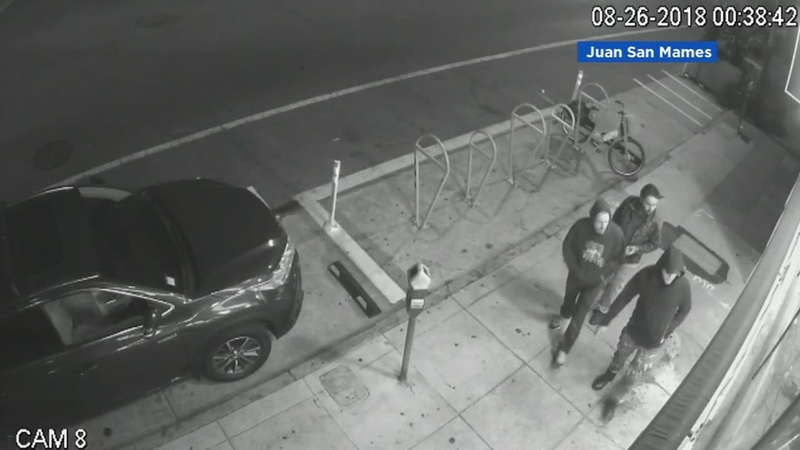 SAN FRANCISCO (KGO) -- An ice cream shop owner in San Francisco's Mission District is offering a $2,000 reward for information after his store was vandalized for the second time.

Both incidents were captured on surveillance cameras.

For the past ten years, Juan San Mames and his wife have owned Xanath Ice Cream off Valencia Street.

When you enter the shop, you can't help but notice the damage done by tagging on the windows.

In August of 2018, three suspects appear on surveillance videos. San Mames said they used an acid.

"This was major. We have this horrendous kind of graffiti and scratch of the window and we also had this acid that they put on the windows," San Mames said.

San Mames said the suspects appear to be well dressed.

"They were not just any kid. They were adults. They were young adults," San Mames said.

When asked how he felt about what they did, he shrugged his shoulders and said "What are you going to do? There's nothing you can do about it. Some people just don't have a conscience."

San Mames said his ice cream shop wasn't the only business hit by them.

"I think they were just doing it because they went from 17th all the way to Cesar Chavez Street and they did about 17 windows. So we're not the only ones, but we are in fact the ones that suffered the most damage," San Mames said.

In September of this year, the ice cream shop was hit again.

"This last guy actually took pictures of himself to show his friends," San Mames said.

In this most recent incident, San Mames said the lone suspect also glued the lock and sealed the door.

He's filed a police report for both incidences but is now raising what once was a $1,500 reward to $2,000 dollars for information that will lead to an arrest. You can choose from the $2,000 reward or an ice cream party.

"You can bring all your friends and we'll do 1,000 ice cream cones and we'll have a big party when we get them," San Mames said.

Next week he plans to have a company try and clean the windows, or he will be replacing all of the windows which will cost him anywhere from $2,000-$5,000.

San Mames has lived in the Mission for 58 years and takes pride in the ice cream his shop makes. Every flavor is organic. They hire high school and college students to work there.