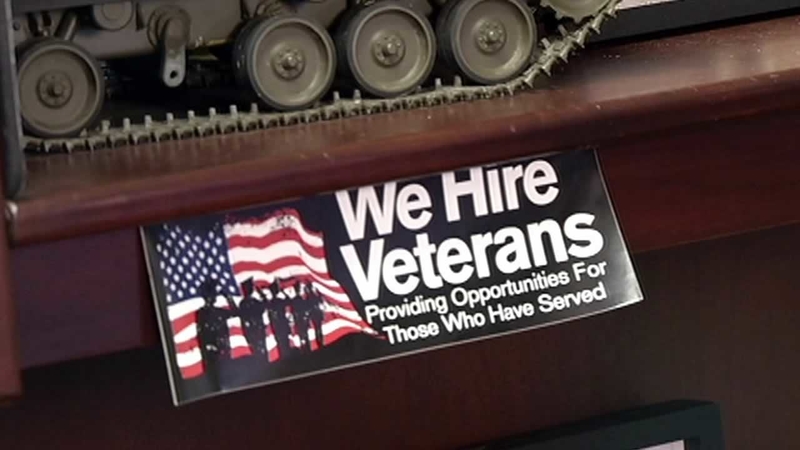 SAN FRANCISO (KGO) -- During this upcoming Independence Day weekend, it's only right to salute the men and women who have served in the military for our country. And one Bay Area Iraq War vet injured by an IED is now paying it forward by giving other veterans a chance to succeed.

"This actually still has the natural blood that was from my... you can tell. They didn't clean it out. There's still stains in here," Sgt. Hien Tran told ABC7 News, showing off the helmet that saved his life when he was severely injured in 2008 by an IED blast while serving in Iraq. His captain lost a leg.

"I do remember voices going in and out. At some point, one of my guys did tell me he thought I had taken my last breath," Tran recalled. Tran, who goes by the initials H.T., was flown to Walter Reed Hospital and remained there for 15 months. "My injuries are loss of my right eye, then I have shrapnel metal still, to the neck, some to this side of the face. I have a left femur bone that's a titanium rod," he said.

The San Jose native says he has no regrets about enlisting in the Army at the age of 26. Before that, he had a career in marketing. It was during a gathering with friends that, he says, he felt something was missing in his life.

"Someone had asked me, 'If you were to die today, what would you think people would say about you?' And everyone around that table had something to say. I just kind of stayed quiet because honestly I felt like I hadn't accomplished anything," Tran said.

A short time later he found himself in Iraq as an infantryman helping in construction while also on patrol on the front line. It was a new world for him, one that he will always carry with him. "They gave me a life. They gave me a purpose. They gave me a meaning. Those guys were great," he said.

He still keeps in touch with many of them. After being injured, and with some experience in construction, H.T. opened his own business in San Francisco. You can't miss it. It's the only one on the entire block with an American Flag. He owns Anvil Construction which has 50 employees, three of which are war veterans. "I served in Vietnam, 1966," one said.

"The goal is to grow out that number to half of the staff. It's going to be a process," Tran said. He says he has plenty of time to help others get that second chance he was also given.
Related topics:
san franciscosan joseiraqwarveteransconstructionu.s. & worldarmyiraq warveteranjobs
Copyright © 2022 KGO-TV. All Rights Reserved.
TOP STORIES
Fireworks ban once again topic of hot debate in Pacifica
LIST: Bay Area 4th of July events
Newsom targets GOP in Florida ad: 'Join us in California'
Abortion rights advocates march in Burlingame ahead of July 4th
SJPD issues nearly 500 citations at sideshow involving 200+ cars
SF couple gets $1,500 fine for parking in their driveway
Gov. Newsom pardons woman who killed her pimp as a teen
Show More
Several dead in Copenhagen shopping mall shooting
VP Harris speaks on 'outrageous' repeal of Roe at Essence Festival
GOP's Ted Cruz feuds with Elmo over kids getting COVID-19 vaccines
Travis Barker, Kourtney Kardashian break silence about hospitalization
Liz Cheney believes prosecuting Trump for Jan. 6 is necessary
More TOP STORIES News