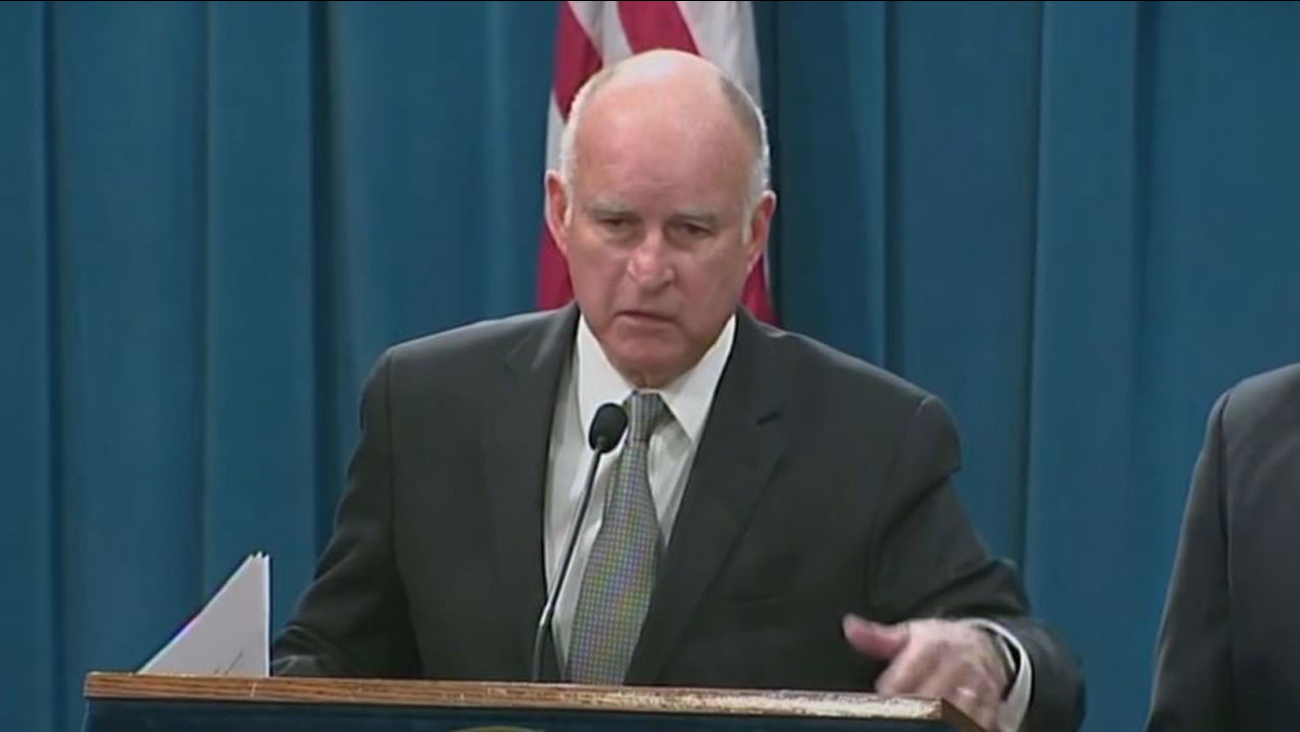 WASHINGTON -- California Gov. Jerry Brown accepted President Donald Trump's call to send the National Guard to the Mexican border, but rejected the White House's portrait of a burgeoning border crisis and insisted that his troops will have nothing to do with immigration enforcement.

The Democratic governor broke a week of silence Wednesday by agreeing to contribute 400 troops, though not all will be on the border. Brown's commitment brought the pledges from four states that border Mexico to just shy of the low end of the president's target of 2,000 to 4,000 troops.

RELATED: Gov. Brown agrees to deploy troops to US-Mexico border
Trump praised Brown on Twitter Thursday, but did not address the governor's comments on immigration. The president said Brown was "doing the right thing and sending the National Guard to the Border. Thank you Jerry, good move for the safety of our Country!"

California Governor Jerry Brown is doing the right thing and sending the National Guard to the Border. Thank you Jerry, good move for the safety of our Country!

Brown cast his decision as a welcome infusion of federal support to fight transnational criminal gangs and drug and firearms smugglers.

"Combating these criminal threats are priorities for all Americans - Republicans and Democrats," Brown wrote in a letter to Defense Secretary James Mattis and Homeland Security Secretary Kirstjen Nielsen.

Brown released a proposed agreement with the federal government that emphasizes the widely shared understanding of the Guard's limited role but explicitly bans any support of immigration enforcement. It says troops cannot guard anyone in custody for immigration violations or participate in construction of border barriers.

The White House praised Brown's decision without addressing his comments on immigration enforcement.

Reaction in California was limited, with few of Brown's allies or opponents weighing in.

RELATED: President Trump blasts Oakland Mayor Schaaf, Gov. Brown while touring border wall prototypes in San Diego
State Sen. Kevin de Leon, a Democratic U.S. Senate candidate and author of California's so-called sanctuary state law, said Guard deployment was unnecessary and not a good use of resources. But he said more can be done to combat border crime and that he appreciated Brown's design of "a clear and limited mission focused on real public safety threats."

"I am confident Governor Brown will not use our National Guard to harass or tear apart immigrant families in California," he said in a statement.

Immigration advocacy groups were critical, saying Brown's support was a boost for Trump's agenda. Lillian Serrano, chair of the San Diego Immigrant Rights Consortium, acknowledged the governor's proposed limits on the Guard's role but said his decision reflected "flawed logic that we need more boots on the ground."

"If he's in disagreement with Donald Trump about the justifications for having the National Guard on the border, then why would he accept it?" he said.

Unlike Republican governors in other border states, Brown disagreed with Trump's portrayal of a border spiraling out of control, noting that Border Patrol arrests fell to the lowest level last year since 1971 and that California accounted for only 15 percent of the agency's arrests on the Mexican border.

"Here are the facts: there is no massive wave of migrants pouring into California," Brown wrote the Trump Cabinet members.

In contrast, Texas Republican Gov. Greg Abbott, who is contributing 1,000 troops, embraced Trump's mission the day it was announced, saying it would promote the rule of law and "help ensure we are doing everything we can to stem the flow of illegal immigration."

The new contingent of California Guard members being deployed could be posted at the border, the coast and elsewhere statewide, Brown said.

California deployed troops to the border under former Presidents George W. Bush in 2006 and Barack Obama in 2010.