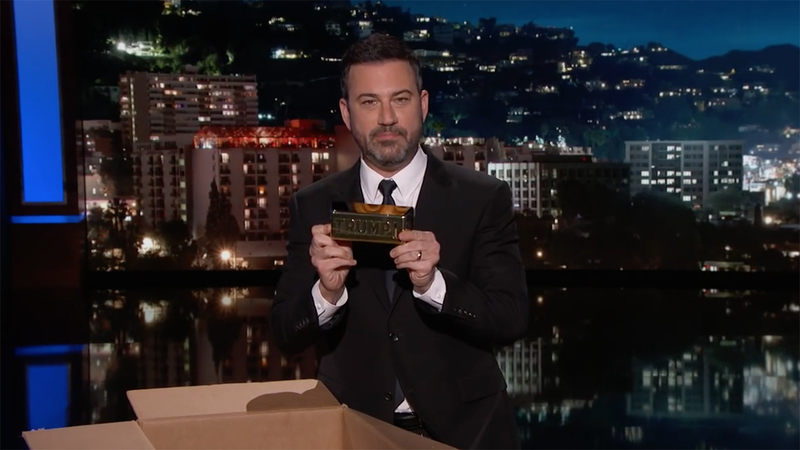 Why Jimmy Kimmel is taking the Trump Store to task

LOS ANGELES -- Jimmy Kimmel is taking issue with the Trump-branded merchandise he bought from the official Trump Organization store.

The comedian and late-night host unboxed his haul on "Jimmy Kimmel Live" Wednesday night, noting that despite the president's pro-business policy and "America first" rhetoric, the majority of the items he bought were manufactured outside of the United States.

But what really drew Kimmel's ire were two other items: a gold bar coin bank and a pet bandana, neither of which specified their country of origin, potentially violating federal labeling requirements.

Per U.S. Customs and Border Protection guidelines, "goods that are imported into the U. S. are required to have a country of origin marking."

"The marking must be legible and permanent enough for the ultimate purchaser to be made aware of the goods origin," the guidelines also state.

While it's possible that the bank and bandana were manufactured in the United States, they would likely still be labeled and promoted as such. The Trump Store website identifies various items (mainly apparel) as being made in the United States, although it does not specify a country of origin for the items Kimmel purchased or many of the other items not bearing the "Made in the USA" logo.

Businesses who are not in compliance with labeling guidelines can be subjected to penalties or court action, according to the Federal Trade Commission.

"Trump's whole platform is about supporting American companies, but his company isn't even supporting America?" Kimmel said. "I'm sure Eric and Don Jr. didn't know about this, I'm sure this was a simple oversight. I'll just file an official complaint and let them sort it all out."

The bit then spilled over onto Twitter, where the Trump Store's official account thank Kimmel for the publicity and took a shot at his comedy.

Hey @JimmyKimmel, it appears you make an even better salesman than comedian – Thanks for the pitch! https://t.co/uw6A6RS81n pic.twitter.com/1ih2mREDpx

"You are most welcome and, may I say, the Chinese do a BEAUTIFUL job making your products!" Kimmel responded.

You are most welcome and, may I say, the Chinese do a BEAUTIFUL job making your products! @DonaldJTrumpJr @EricTrump https://t.co/te6L2pNkw0

The Trump Store website is run by the Trump Organization and is not directly affiliated with the Trump campaign, which operates its own online store.