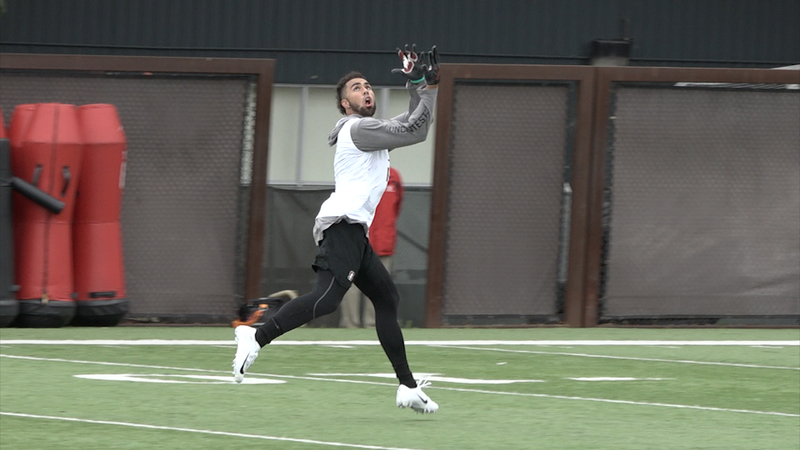 JJ was born to two professional basketball players across the pond before he and the family moved to South Carolina where he played his high school ball.

At Dorman High School, Arcega-Whiteside showed off his athletic genes by winning the state's Gatorade Player of the Year award as a senior.

He scored 20 touchdowns in his senior year alone.

In addition, he was an all-state basketball player. This comes as no surprise given his parents athletic past.

But he also was a track star in the 100-meter dash as well.

When Stanford signed Arcega-Whiteside to a National Letter of Intent, they hoped they found themselves a fast, athletic receiver that could catch footballs like rebounds in the endzone.

How right they were and it didn't take long to see it.

"I'm a complete receiver," Arcega-Whiteside said. "I can run any route that you ask me to and be able to do it just as well as the jump-ball. But, if the jump-ball is there, I'll go up and get it."

Just two games into his Sophomore season, he introduced the Cardinal fans to just what he can do.

With 24 seconds left on the clock at the Rose Bowl in Pasadena, Stanford trailed UCLA.

Quarterback Ryan Burns dropped back and threw the way of Arcega-Whiteside who only had 2 career catches to this point.

With the game on the line, Arcega-Whiteside did what he would do so many times the rest of his college career and came down with the jump-ball.

This was just the start of what would be a historic career scoring touchdowns for #19.

28 touchdown catches later, the second most in school history, including 14 his senior year, Arcega-Whiteside proved to be one of the most deadly targets in the redzone.

It helped him earn a 2018 Biletnikoff Award semifinalist spot, as well as an All-PAC-12 second team nod.

"I compare myself to Mike Thomas," Arcega-Whiteside said. "He's not the strongest, biggest, fastest guy on the field, but he plays football. He's one of the best, if not the best, football players on the field. He's smooth and a great route runner. Every time the ball is thrown his way, he catches it. That's how I want to be."

Still, Arcega-Whiteside felt like he had something to prove to NFL teams after the season ended.

He was invited to participate in the 2019 NFL Scouting Combine, but he did not do any of the drills in Indianapolis.

Arcega-Whiteside instead wanted all scouts, coaches and management to come to Stanford to watch him perform at the Cardinal Pro Day.

Arcega-Whiteside was very excited with his numbers, but still wanted to show more.

With former teammate Keller Chryst throwing him the ball, Arcega-Whiteside ran a wide variety of routes to show evaluators that he is more than just a redzone specialist.

Only one ball hit the ground, a throw that was just too far in front of him.

When NFL teams look for players, they want to see production, ability to shine in big games and a good attitude.

Arcega-Whiteside has checked all boxes and is now expected to be drafted in the second or third-round of the 2019 NFL Draft.

The work at this point is out of his hands.

Now he just waits to hear his name called and his dream come true.

But he'll always remember his time on the Farm.

"The thing I'm going to miss the most is being around the guys," Arcega-Whiteside said. "There's never a dull-moment in that locker room so I'm going to miss that. But, when I move to the next level they are all going to be super supportive and super proud of me."