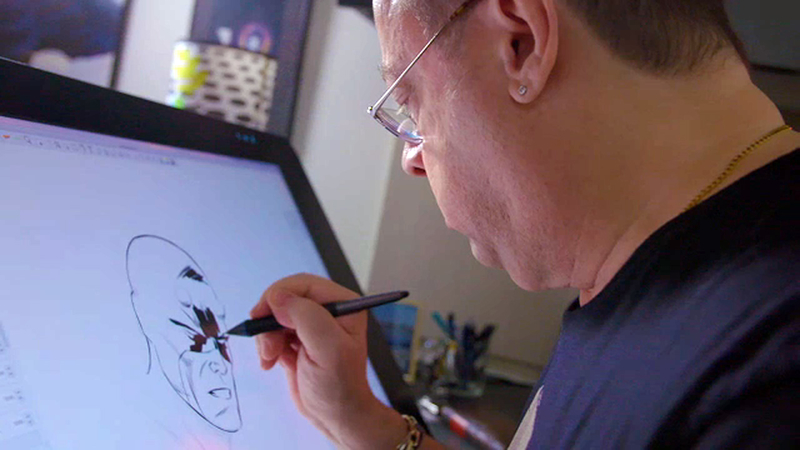 NEW YORK CITY -- At the end of "Black Panther," "Avengers: Infinity War," and "Avengers: Endgame," the movie credits give special thanks to comic book fan Joe Quesada, who turned his passion into his profession and found his place as Marvel's Chief Creative Officer.

"(It) essentially means that I overlook all the creative aspects of the company," he said. "Make sure that we're telling stories that are truly within the Marvel DNA, that our characters are acting like our characters."

In 2000, Quesada was the first Hispanic to be named Editor-in-Chief at Marvel Comics, so his current job is a perfect fit.

"I read our scripts for our television shows and comic books and animated shows," he said. "I work on our theme parks division. I'm kind of all over the place. And I still draw. And I still write."

Quesada grew up in Queens, the son of an immigrant from Cuba. His dad helped build Shea Stadium and proved very supportive of his son.

"My dad was always very, very encouraging of me being an artist," he said.

Quesada was 7 when he discovered "Spider-Man" and his fictional alter ego Peter Parker, who were practically his neighbors.

"(He) lived in Forest Hills, I lived in Jackson Heights," he said. "I could ride my three-speed to Peter Parker's house if I'd wanted to."

"Spider-Man" remains a character he enjoys drawing, a link to his past and to warm memories of his father.

"Within our culture, no matter where you are, where you come from within that broad spectrum of Hispanic culture, it's always about family," he said.

Both of his parents were born in Cuba, and a few years ago, Quesada went to Havana to greet relatives who still live there. Most meaningful was the chance to meet his aunts, because their sister -- his mother -- passed away many years ago.

The Society of Illustrators is planning for an exhibit of his work to open next week, and he has a new book of his best work in stores now.