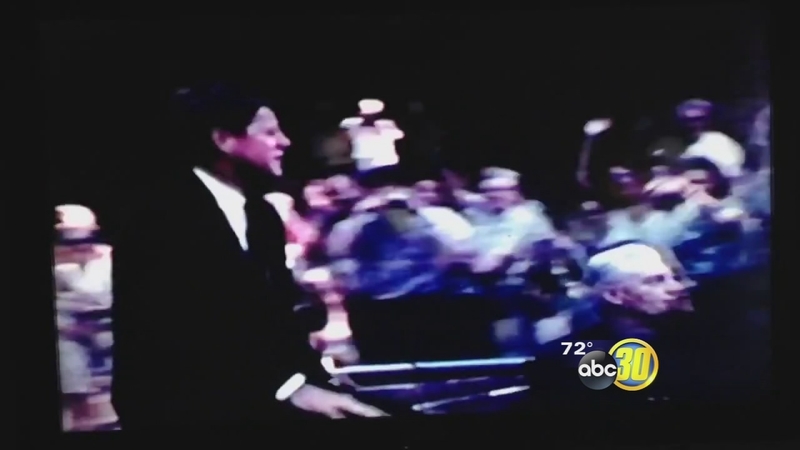 Fresno man looking back at last presidential visit to Yosemite

FRESNO, Calif. -- The First Family's visit is bringing back memories of the last presidential visit to Yosemite for some-- including one Fresno man who got a front row seat to John F. Kennedy's visit in 1962 and he has home video of that trip.

The only memories of 1962 Steve Klein has are on film.

"My mom got all the shots, she was in the right place at the right time."

He's remembering his mom Darene, and the day they caught a glimpse of John F. Kennedy in Yosemite.

"The way he's dressed and the Lincoln he's in, I feel that was a really great president, you know."

Steve was just two months old when it happened, but the memory is vivid because his mom filmed this clip.

"If you look at their pictures, they're all black and white, but I guess my mom was cutting edge, she was color in '62."

He says his mom always had a camera in her hand. She documented all of their road trips so the family wouldn't forget them, and she would always talk about this one.

"A lot of them are gone in that picture, a lot of 'em and so is my mom, unfortunately. We lost her last Thanksgiving, but with that video, she lives on."

Before Darene passed Steve took the clip, turned it into a digital memory and posted it on Facebook. This week he took another look at it because the First Family is making the same trip.

"To come in late May, early June, you're gonna get Yosemite on blast," said Steve.

President Obama will follow Kennedy's footsteps. He will land at Castle Airport in Atwater on Friday-- on the same runway, and fly to the park, in a helicopter just like JFK did

"For me personally, it just brings back an era."

It takes Steve back.

"It's a happy time, it brings back happy memories of her."

To a moment in time, he'll never forget.