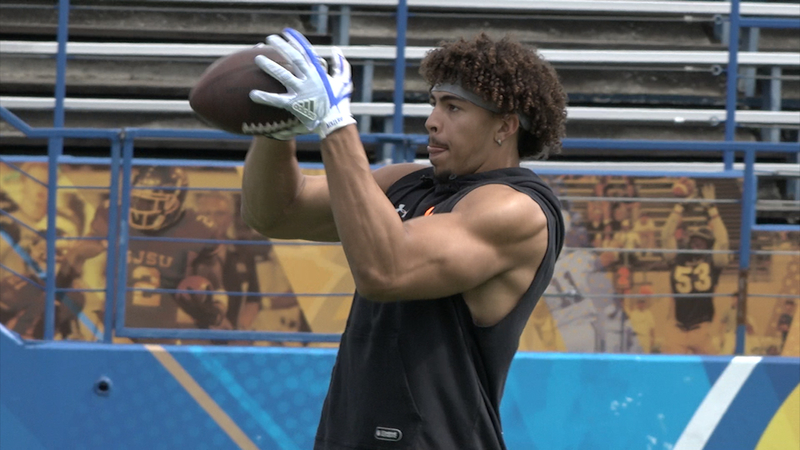 But his 1,025 career receiving yards and seven touchdowns may not have happened had it not been for a position change his freshman year.

Oliver was recruited to San Jose as a defensive end/linebacker from Paso Robles, Calif.

Injuries forced the team's hand to move Oliver to the other side of the ball, marking the start of what was one of the best careers by a tight end in San Jose State history.

"It's football. It's the game that I've been playing since I was 7 years-old," Oliver said. "It wasn't crazy difficult, but it was a process to get there. It took all four years, but it was a grind and I'm happy I did it."

Oliver took over the offensive spotlight for the Spartans in his senior season.

The converted defensive player proved to be one of the most consistent options in the Spartan offense.

These statlines helped him earn first-team All-Mountain West Conference Honors and invitations to the NFL Senior Bowl and Scouting Combine.

At the Senior Bowl, Oliver played for the team coached by Kyle Shanahan and the San Francisco 49ers staff.

He said as a California kid, it would be great to be drafted by the 49ers or Oakland Raiders, but he will be happy with any team to select him.

Oliver was the lone representative at the combine where he showed out with a 4.63 40-yard dash with an explosive 117 inch broad jump and 34 inch vertical jump.

The boxes continued to be checked off for potential suitors in the NFL.

ABC7 was at his official Pro Day in San Jose when Oliver put his work in for the field drills, where only one ball thrown his way hit the ground. It was an overthrow.

In addition to his success and skillset, Oliver is highly regarded by his teammates and the SJSU coaching staff.

Spartan Head Coach Brent Brennan said he is a great teammate and will continue to be at the next level.

"He practiced hard every day," Coach Brennan said. "He took his leadership role as a team captain very seriously. When you have a guy that has an opportunity like this and he puts in the work and takes steps toward getting better, good things are going to happen for him."

Oliver is projected to be a mid-to-late-round selection in the NFL Draft.

One mock draft has Oliver getting selected by the Cincinnati Bengals in the fourth round.

During the lead-up to the draft, Oliver had private visits with the Denver Broncos and Minnesota Vikings, two teams who could also use a big, pass catching tight end prospect.

The evaluation stage of the NFL Draft is now over.

No San Jose State Tight End has been drafted since 2004.

The stage is set in Nashville, Tenn. for that to change, with Round One beginning on Thursday, Apr. 25, 2019.

At some point over the weekend, Josh Oliver should hear his name called, making his NFL dreams come true.

"It's crazy, it's something I have dreamt of as a kid," Oliver said. "When I was a young one, I always wanted to go to the NFL, it was always my dream. It has gotten more surreal as the experience has moved on. It's right there, it's right around the corner. All this stuff has been a huge blessing. I'm thankful to have done everything. But I'm ready to get back to a team and start football."