KGO
By Liz Kreutz
SAN FRANCISCO (KGO) -- Kamala Harris' roots run deep in the Bay Area and there are likely few people more excited for this moment than her longtime friends and supporters.

ABC7 News anchor Liz Kreutz spoke to many of them Saturday morning just after the news broke of Biden and Harris' win to get their reaction.

Just moments after the historic announcement that Oakland native Harris had broken one of the highest and hardest glass ceilings, ABC7 spoke on air with some of her closest friends and supporters, all overwhelmed by the news.

Porter is a childhood friend. They went to elementary school together in Berkeley and she calls herself the other girl on the bus.

Liz Kreutz: Could you have ever imagined that she would be the one breaking this glass ceiling?

"No, I knew Kamala was destined for greatness because Kamala just had an air about her," Porter said. "A confidence about her. She had the ability to listen to people from a very young age, very young age. To pay attention in class.

She had a gift of that to be able to listen and process information and turn it into something positive.

Speaking from Delaware on Saturday, Nov. 7, Vice president-elect Kamala Harris paid tribute to Black women who "so often prove they are the backbone of our democracy."

Debbie Mesloh is another longtime friend and adviser to Harris, who has been by harris' side through every step of her California political career, starting during the 2003 race for San Francisco district attorney.

"I remember when she ran for attorney general. People were saying they are not ready for a woman in California," Mesloh said. "Not ready for a black woman. Not ready for some who is opposed to the death penalty and I think a lot of this comes from her Mother Shyamala, right? Who was a pioneer in her right of Kamala having that self-determination and her self-confidence."

Harris' win is also being celebrated by Harini Krishnan, co-chair of California's South Asians for Biden, who was eating Doritos for breakfast in honor of Harris .

"I have Doritos which is Kamala's (favorite) snack," she said. "I will say that this is a moment for so many of us who worked so hard to see this."

For Krishnan, Mesloh and Porter, seeing Harris, their girl from Oakland, become the first woman, first black person and first Indian-American vice president-elect is something they all say they'll never forget

"This shows little girls that you can dream big and if you want to do something and you want to spend the time and work hard and do the work that needs to be done to get here, that you have every opportunity to be whoever you want to be. To be who you are and to live out loud and be proud," Porter said.
Report a correction or typo
Related topics:
politicsberkeleydowntown oaklandelection resultskamala harriselection dayvote 2020joe biden2020 presidential election
Copyright © 2020 KGO-TV. All Rights Reserved.
RELATED 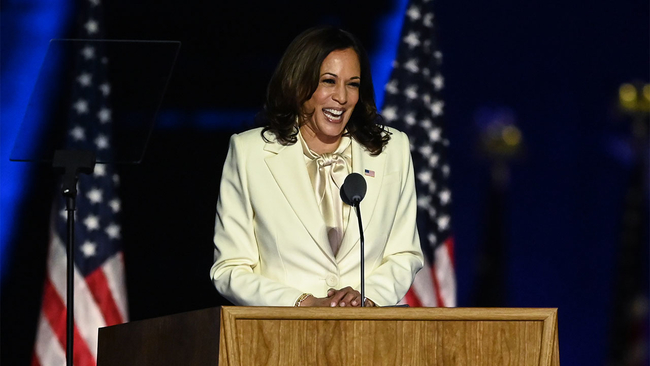