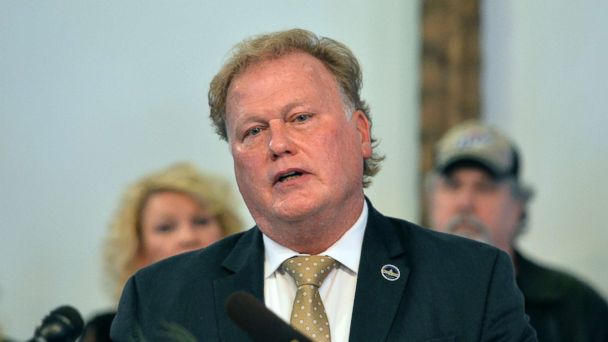 Kentucky state Rep. Dan Johnson took his own life on Wednesday afternoon after being publicly accused of molesting a teen girl, according to ABC affiliate WHAS in Louisville.

An expansive expose published Monday by the Kentucky Center for Investigative Reporting alleged that Johnson sexually abused the 17-year-old victim after a New Year's party in 2013.

Bullitt County coroner David Billings told ABC News Wednesday night that Johnson was found with a single gunshot wound to the head at Greenwell Ford Road in Mount Washington, Kentucky. His death is being treated as a "probable suicide." A .40 caliber gun was recovered at the scene and is in the possession of law enforcement.

Kentucky Speaker Pro Tem David Osborne said in a statement, "It is with great sadness that we have received confirmed reports of the passing of Rep. Dan Johnson this evening. Please keep his family in your prayers during this incredibly difficult time."

The state's governor, Matt Bevin, confirmed Johnson's death, but not how he died, earlier in the evening in a tweet.

Johnson vehemently denied the allegations at a press conference Tuesday.

"This allegation concerning this lady, this young girl, absolutely has no merit, these are unfounded accusations, totally," he said, according to the Louisville Courier-Journal.

Johnson was one of the latest in a long list of high-profile men who have been accused of sexual misconduct across a range of industries.

Sen. Rand Paul, a Republican representing Kentucky, tweeted Wednesday night, "Just terrible news from Kentucky tonight on the passing of Rep. Dan Johnson. I cannot imagine his pain or the heartbreak his family is dealing with tonight. Kelley and I pray for his loved ones."

And the Kentucky Center for Investigative Reporting, part of Kentucky Public Radio, which ran a five-part series on Johnson and his past, said in a statement Wednesday night, "All of us at Louisville Public Media are deeply sad to hear that State Representative Dan Johnson has died, apparently of suicide. We grieve for his family, friends, church community and constituents."

The statement continued, "Our Kentucky Center for Investigative Reporting released a report on Johnson this week. Our aim, as always, is to provide the public with fact-based, unbiased reporting and hold public officials accountable for their actions ... As part of our process, we reached out to Representative Johnson numerous times over the course of a seven-month investigation. He declined requests to talk about our findings."
Report a correction or typo
Related topics:
abc newsnational
Copyright © 2021 ABC News Internet Ventures.
TOP STORIES
At least 3 dead, up to 99 missing in Florida building collapse
Audio recording released with voice of VTA rail yard gunman
Security camera video shows moment of Surfside building collapse
CA lawmakers seek to remove 'he' from state laws
Levi's Stadium vaccination site closes after 4 months
Here's how you can get free Giants tickets with your COVID-19 vaccine
Biden, bipartisan senators have deal on infrastructure
Show More
Kitten rescued from freeway ledge near SFO up for adoption
Heat wave heading for NorCal, some spots to reach 114
Nearly all COVID deaths in US are now among unvaccinated
Drought Rules: 230,000 San Jose residents told to limit water usage
VIDEO: Giant crane narrowly passes under Bay Area bridges
More TOP STORIES News