KGO
By by Mindi Bach 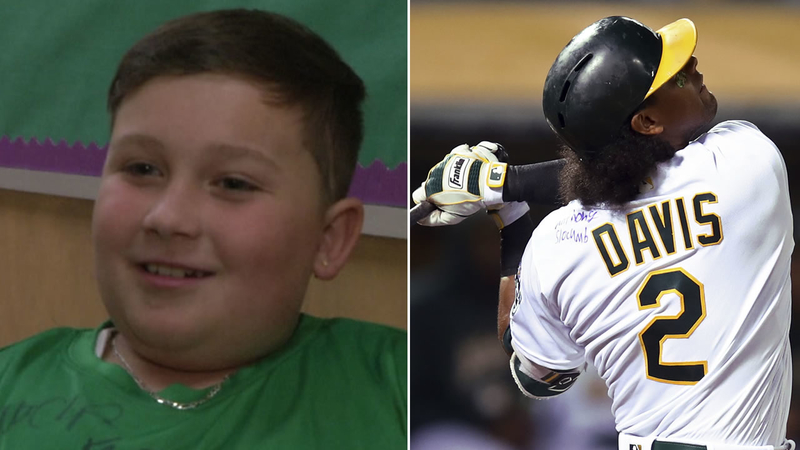 OAKLAND, Calif. (KGO) -- An Oakland boy had the opportunity to meet his baseball hero, Khris Davis. It turns out, the boy made quite an impression on the A's slugger.

Davis' 37th home run of the season did more than travel 438 feet. It carried with it an important message. "I thought about him around the bases. There's nothing like hitting a home run. Hope he got some joy, excitement from watching that. I hope he saw it," he said.

He certainly did. "I was so happy," said Anthony Slocumb. "If you go and watch the A's game, you'll see me in the crowd cheering with my hands up."

Anthony's autograph is on the back of Davis' jersey. The boy met his favorite player before the game as part of a group from the Make-A-Wish Foundation. He asked Davis to sign his jersey, and Davis asked Anthony to do the same.

"My cheeks were really red. It made me happy but nervous because everyone would see my handwriting," Anthony said.

Anthony will now be able to see his 10-year-old autograph whenever he wants. Davis and the A's decided to give the game-worn jersey to Anthony, and they had another idea. "This weekend, we will auction off a jersey from the Players Weekend, jersey to benefit the Make-A-Wish, something Khris wanted to do," said A's President Dave Kaval.

The special experience comes at a good time for Anthony. He started sixth grade at a new middle school. "Well school is stressful, but I have really nice teachers," he said.

After enduring surgery and a year of chemo, Anthony is cancer-free. But kids at his school who don't know often ask him about his scars.

He tells them what happened, but now they'd rather hear about how he met Khris Davis and what he plans to do with that new jersey. "First, I would hug it and then hang it on my wall forever, with this one," he said.