Teachers honor 1st-grader who sparks 'wave' of kindness in Royersford 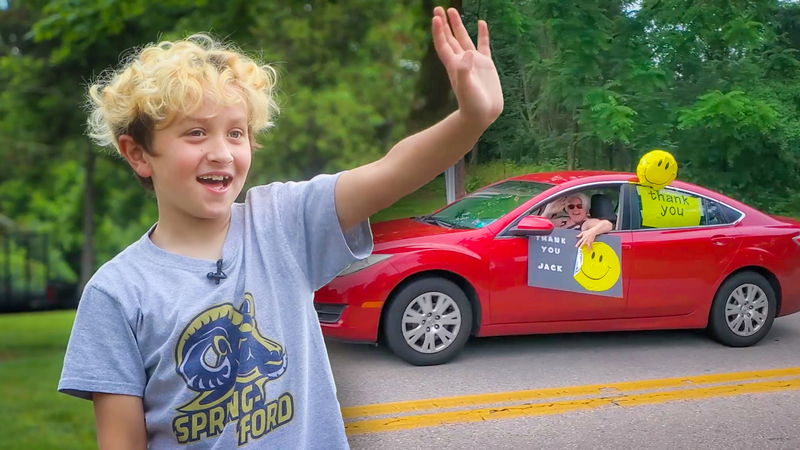 Teachers honor 1st-grader who sparks 'wave' of kindness in Royersford

ROYERSFORD, Pennsylvania -- "When nice people do nice stuff to other people, you get good things," said 7-year-old Jack Russo.

The first-grade student learned that lesson from his parents, who say he developed a peculiar hobby as a toddler.

"We were coming out to get in the car to take him to daycare," said Rick Russo, Jack's father. "And we would wave to busses every morning and the busses started honking back."

The trend never stopped. As long as he can remember, Jack has made it his mission to smile and wave to every car that drives by his house each morning.

"It doesn't matter what the weather is, we're out here waving," he said. "Cold, hot, snowy, rainy, sunny, whatever."

Jack calls recurring drivers his "friends," despite having never met most of them. The father-son-duo has bestowed nicknames to each passerby, such as, "The Rockstar," "The Tea Driver," and "The Pinky Waver." In addition, local police officers and teachers are among those who look forward to waving back to Jack each morning.

"We've never met these people, and we can see them looking for him, and wanting to wave and wanting to smile," said Rick. "He's only seven years old and he's making this community happy and they're recognizing it and that's what melts my heart."

Today, Jack was recognized in a most special way. Teachers in the local school district organized a drive-by parade to smile and wave back more than ever before.

"Jack needed to know that something simple like a smile and wave goes a really long way," said Denise Gebhard, a teacher at the 5th and 6th Grade Center at Spring-Ford Area School District.

Gebhard was among the leaders of the parade, honking at the helm of her decorated vehicle.

"We put together some thank you cards for him," she added. "Lots of our fifth and sixth-grade teachers signed it, just letting him know he brings a smile to our face and that's exactly what we needed this year."

When Jack is not waving at the foot of his driveway, he is acting as a de facto mascot for the school community.

When Jack is not sweeping up the competition in sports, he can be found practicing piano and playing video games. He hopes to continue waving to the community for as long as he gets picked up by the school bus.
Report a correction or typo
Related topics:
royersford boroughwpvifeel goodlocalish
LOCALISH
Finding a best friend and a forever home for abused animals
Have your waffle and eat your ice cream too at The Wicked Waffle
Figure out whodunit with Clue Live
Disney+ "The Stories Continue" Tour
TOP STORIES
Pleasanton PD says they've searched all areas for missing runner
US faces nurse shortage heading into 4th COVID surge
How hundreds of SFGH, UCSF staff got infected with COVID
Managing pandemic anxiety amid 4th surge
San Mateo mother, 3-year-old child missing
Bacon may disappear in California as pig rules take effect
Steak cake? Giants players give manager unique birthday dessert
Show More
Pediatricians see uptick in COVID testing among young children
NHL to investigate claim Sharks' Evander Kane bet on own games
Oakland vaccine clinic offers free school supplies to students
Popular zydeco musician shot in the back while at Louisiana concert
Titanic wreckage 'rapidly' deteriorating, researchers say
More TOP STORIES News