Kyle Rittenhouse takes the stand: Key takeaways from Day 7 of the trial

Why did Rittenhouse go to Kenosha? And what did he say about his encounter with Joseph Rosenbaum?
AP
By Todd Richmond, Associated Press 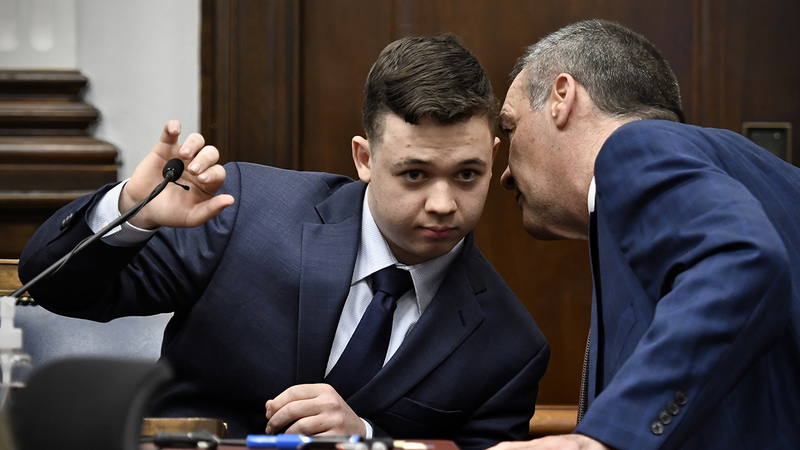 KENOSHA, Wis. -- Kyle Rittenhouse took the stand in his murder trial Wednesday, testifying about how he shot three men during a protest against police brutality in Kenosha, Wisconsin, last year.

Rittenhouse killed Joseph Rosenbaum and Anthony Huber and wounded Gaige Grosskreutz. He faces multiple charges, including intentional homicide. Rittenhouse, who was 17 at the time of the shootings, has argued that the men attacked him and he fired in self-defense.

Here's a look at some highlights from his testimony:

Rittenhouse said he lived in Antioch, Illinois, just across the state line from Kenosha, in August 2020. He enjoyed swimming, going to the beach with his friends and "just normal teenage stuff." He was a police explorer for the Grayslake Police Department and a cadet with the Antioch Fire Department. He also was a certified lifeguard trained in CPR, defibrillator use and "basic life support." He said his father, grandmother, aunt, uncle and a cousin live in Kenosha - an apparent attempt to push back against the prosecution portrayal of him as an outsider who went there looking for trouble.

Jurors in the Kyle Rittenhouse trial heard from the teen directly about the night he shot three men during street unrest in Kenosha.

Why did he go to Kenosha?

The protests began on Aug. 23, 2020, hours after a white Kenosha police officer shot Jacob Blake, a Black man, during a domestic disturbance. Rittenhouse said he saw video on social media of the unrest.

Two days later, Rittenhouse went to downtown Kenosha and volunteered to clean graffiti off a high school. He met the owners of a car dealership where vehicles had been burned, offered his "condolences," and said he wanted to help. He said the owners asked his friend to protect their business, and that he joined his friend and others that night. He took his semi-automatic rifle and first-aid supplies. He gave his bulletproof vest - which he said was issued by the Grayslake Police Department - to a friend. He said he felt he wouldn't need it "because I'm going to be helping people."

What did he say about his encounter with Rosenbaum?

He said he had been putting out fires and asking people if they needed medical help when he saw Rosenbaum carrying a steel chain and wearing a mask. Rosenbaum began screaming at him, he said.

"He was just mad about something. He's screaming, 'If I catch any of you (expletives) alone I'm going to (expletive) kill you.'"

When he encountered Rosenbaum again later, Rosenbaum shouted, "I'm going to cut your (expletive) hearts out and kill you," Rittenhouse said.

Later, he was walking with a fire extinguisher after hearing protesters were burning cars at one of the lots his friends were trying to protect. Rittenhouse said he saw a fire in a truck on one of the lots then Joshua Ziminski approached him with a gun. Rosenbaum came out from behind some cars and "ambushed" him, Rittenhouse testified.

MORE: How did Kyle Rittenhouse do on stand in murder trial? He held his own, experts say
EMBED More News Videos

Kyle Rittenhouse testified that a man that he shot in Kenosha, Wisconsin had threatened to kill him. Warning, video contains graphic language.

He said he fired four times, went up to Rosenbaum to see if he could help him, then ran away because people were yelling "get his ass, get him, get him."

He also said later that he feared that if he let Rosenbaum take his gun, "he would have used it and killed me with it and probably killed more people."

What happened as he ran?

Huber hit him in the neck again with the skateboard and grabbed his gun, Rittenhouse said.

"I can feel the strap coming off my body," he said. "I fire one shot."

Gaige Grosskreutz, the sole survivor shot by Kyle Rittenhouse in Kenosha, and his attorney discuss their reaction to Rittenhouse's testimony and his own experience on the stand.

What did he say about his interactions with police?

Rittenhouse testified that after he shot Grosskreutz he approached a line of police vehicles with his hands up.

"People were screaming and I'm just trying to get to the police," he said. "I didn't do anything wrong. I defended myself."

He walked up to a squad car and told an officer he had just shot somebody. "The officer said 'get the (expletive) back or you're going to be pepper sprayed' and 'go home, go home, go home,'" he said.

He turned himself in at the Antioch Police Department about an hour later because the Kenosha station was barricaded, he said. He said officers made him sit on a chair and wait for Kenosha detectives to arrive.

"I was vomiting and having panic attacks and my head was spinning," he said. "I couldn't think clearly."

What did he say about his state of mind?

A defendant's state of mind is crucial in a self-defense case. He must show that he reasonably believed his life was in danger and the amount of force he used was appropriate to win an acquittal. Assistant District Attorney Thomas Binger pressed Rittenhouse about his intentions during cross-examination, asking him whether he meant to kill the three men.

"I didn't intend to kill them. I intended to stop the people who were attacking me," Rittenhouse said.

Defense attorney Mark Richards also asked Rittenhouse at one point why he stopped running from Rosenbaum - relevant in a case where jurors may consider whether he did all he could to move away from danger. "There was no space for me to continue to run to," Rittenhouse answered.

Kyle Rittenhouse becomes emotional while on the stand for charges that he killed two men and injured another.

Did Rittenhouse keep his composure?

His youth shone through, for example when he referred to attorneys as "you guys." He gestured often with his arms, simulating how Rosenbaum reached for him, how Grosskreutz held up his hands with the pistol and how he walked toward police with his hands up.

When he was describing how Rosenbaum appeared and chased him, he cried, and Judge Bruce Schroeder called for a recess.

Rittenhouse was composed for most of the rest of his nearly daylong time on the stand, except for another period during the afternoon's cross-examination where his voice thickened as he insisted to Binger that he "never wanted to shoot Mr. Rosenbaum."

"He was chasing me. I was alone. He threatened to kill me earlier in that night. I didn't want to have to shoot him," he said.

The proceedings were slowed in the afternoon as prosecutors prepared to show drone video of the moments leading up to Rittenhouse shooting Rosenbaum. After Binger said the prosecution would be pinching and zooming on an iPad to show events more clearly, defense attorney Mark Richards objected on the grounds that the device's software might not accurately depict what happened when the pinch zoom was used.

Binger responded that it was no different than using a magnifying glass on a picture, but Judge Bruce Schroeder said he would need to bring in an expert to prove that the technology doesn't distort.