In Morro Bay, a shark bit a 14-inch wide, 8-inch deep chunk out of a surfer's board at Moro Strand State Beach.

Elinor Dempsey was surfing in front of Morro Strand Campground when she noticed a large, dark gray marine mammal about 4- to 6-feet long swimming under her board. She said she initially thought it was a dolphin, but when it quickly approached her surfboard she noticed it was a shark. 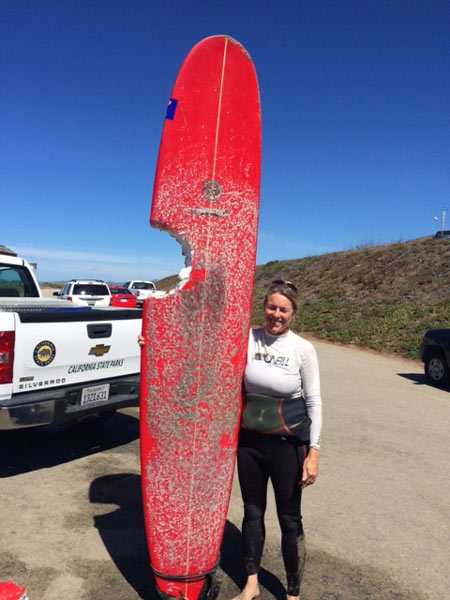 Surfer Elinor Dempsey stands beside her surfboard where a 14-inch wide, 8-inch deep chunk was bit off by a shark in Morro Bay.

She said pushed her board toward the shark as it breached the water. She quickly jumped off her board and swam to shore with the help of other surfers who were nearby.

State park rangers surveyed the damage to Dempsey's board, evacuated the water and notified Morro Bay Harbor Patrol officers to check the area for the shark.

A California Department of Fish and Wildlife biologist who was nearby checked the bite mark and determined the animal was a young adult male white shark that was about 6-feet long.

The waters will be closed for the next three days, and shark warning signs were posted from the Rock to Cayucos.

In San Diego County, lifeguards closed a portion of the beach in La Jolla after swimmers and kayakers encountered a large, aggressive hammerhead shark near the shore.

Around 1 p.m., lifeguards received a report of an 8- to 10-foot hammerhead shark circling a group of swimmers and kayakers. Swimmers were able to climb aboard the kayaks and get to shore safely.

One of the kayakers captured footage of the shark circling around the group several times. The hammerhead followed the kayakers all the way to the shore. It was last seen outside the surf line by Avenida de la Playa at the south end of La Jolla Shores.

A large hammerhead shark swims in circles around kayakers, one of whom captured this photo, in La Jolla on Saturday, Aug. 29. 2015.

Lifeguards analyzed the footage and decided to immediately close the beach. A perimeter was set up from La Jolla Cove to the south and Scripps Pier to the north.

A fire rescue helicopter was used to search the area of the initial sighting, but the shark has not been spotted since.

The beach reopened after a 24-hour closure. A marine biologist at Scripps Institue of Oceanography said the shark's behavior warranted the closure.