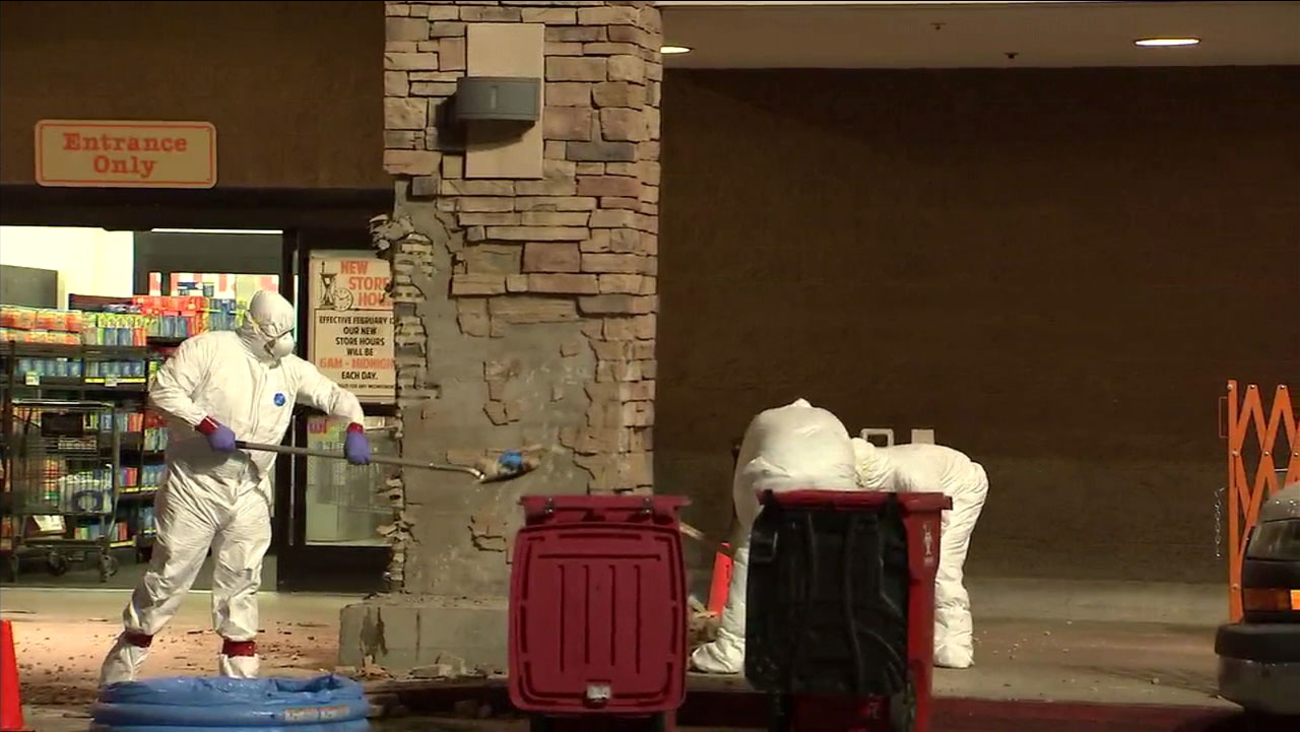 Crews work to extricate a body from inside an entrance column at a Lancaster supermarket on Saturday, Aug. 11, 2018.

LANCASTER, Calif. -- A decomposing body was found inside the entrance column of a supermarket in Lancaster on Saturday, and investigators believe it may be a chase suspect who escaped authorities earlier this week.

Los Angeles County sheriff's homicide detectives responded to a WinCo Foods store in the 700 block of West Avenue K at approximately 2:40 p.m., according to sheriff's officials.

LASD Lt. John Corina said the manager of the store smelled a strong odor from the column in front of the business. He assumed it was a sewage leak and called out a plumber to check it out. The plumber and the store's handyman broke off some of the brick from the column and found a leg and shoe inside, Corina said.

#breaking A horror film come to life in #lancaster after decomposing body is found inside entrance column of a supermarket.#lasd detectives believe it may be suspect who led deputies on foot chase Monday & disappeared on the roof.
The latest on investigation at 11pm @ABC7 pic.twitter.com/zfnu02RjyU

He added that authorities are in the process of recovering the body and identifying it. It's believed it may be a man who led deputies on a chase on Monday.

Corina said the suspect ran away when the chase ended in a crash. He ran into the WinCo store and onto the roof, but deputies were not able to locate him.

There is access on the roof to the fascia of the store and down into the column, Corina said.

"He got out of the car, ran in, ran up the steps... and somehow got on the roof, and last I heard he got away. They shut the whole thing down," described witness Henry Oliver.

Investigators said after he got on the roof, they didn't see or hear any signs of the suspect and assumed he had managed to escape. Detectives said he hasn't been heard from since.

"He may have gotten inside there and somehow gotten down the column, trying to hide from the deputies and then couldn't get out," Corina said.

The coroner will have to determine exactly how the victim died. It's unclear if he fell to his death or became trapped and couldn't get out.
Some seasoned investigators were left in shock.

"It's been over 100 degrees up here everyday. I cant imagine being inside that column and just baking. It's a strange development, and if he died that way, it's a horrible way to die," Corina added.

The store was expected to stay closed as the investigation continued and as crews worked to extricate the body.