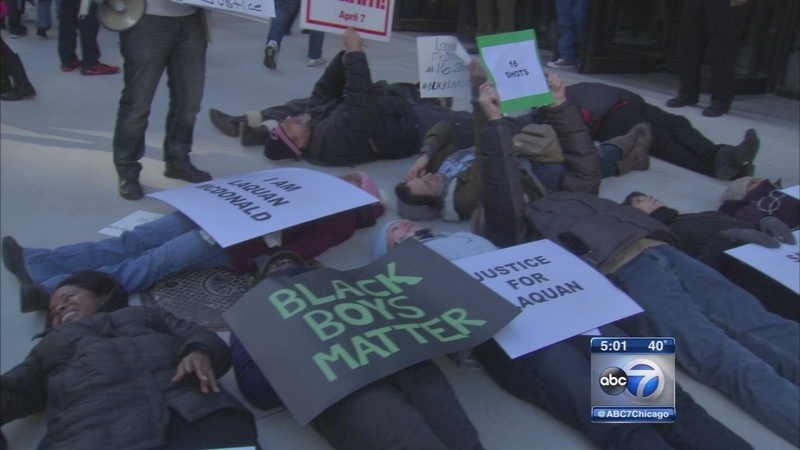 CHICAGO -- The Chicago Police Department is facing new criticism following the release of post-incident reports from the Laquan McDonald shooting, as community leaders Saturday night have concerns over documents that appear to contradict the dashcam video.

The files are labeled aggravated assault to a police officer, justifiable homicide. It is a conclusion based on reports from Jason Van Dyke and several other officers who witnessed the fatal shooting. Throughout the file, Van dyke is referred to as the victim, McDonald as the offender.

Chicago is seeing another weekend of protests on the Magnificent Mile during the height of Christmas shopping. A peaceful demonstration followed the release of hundreds of pages of Chicago police reports from the McDonald shooting.

The version of events from Jason Van Dyke and several other officers on scene is quite different than the dash-cam video tape.

"That is a culture of cover up," said Rev. Jesse Jackson. "Those who are aware of it should be aware of it and must held accountable."

Rev. Jackson is calling for all officers who submitted reports that were not truthful to be fired. While the video shows McDonald walking away from the officers, Van Dyke and others claim the 17-year-old "swung his knife at them in an aggressive and exaggerated manner."

Van Dyke said, "McDonald raised the knife across his chest and over his shoulder, pointing the knife at Van Dyke." The report goes on to state that Van Dyke believed McDonald was attacking him with a knife and attempting to kill the officer. "In defense of his life," Van Dyke "back-pedaled and fired his handgun at McDonald to stop the attack."

"I think what people are looking at is the dashcam video and trying to figure out how anything can be said doesn't fit that," Angelo said.

Protesters say the video tells all and it doesn't match up with what the officers said. Angelo insists there is no culture of cover-up within the police department.

The officers with Van Dyke on the night of the shooting have not been disciplined or put on desk duty. The push for their removal will be the subject of another protest Sunday when Rev. Jackson and others plan to march from State Street to the Thompson Center.